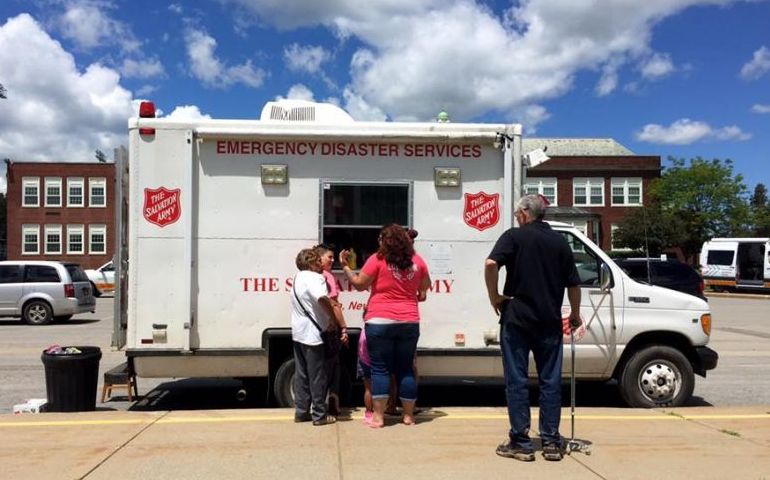 Empire State Division, NY (July 27, 2017) – For 27 days and counting, The Salvation Army Emergency Disaster Services teams from across the Empire State Division have been engaged in disaster relief operations due to severe weather across twenty counties in New York State.  Teams and resources from across the entire division have provided response and recovery services to communities impacted by seven separate flash flood incidents and three tornadoes that have struck across the division since July 1, 2017.

Our services have included the broad scope of our abilities across the division, from feeding of survivors and first responders, to providing emotional and spiritual care, providing short term recovery and resources to working with our partners and government agencies across the impacted areas.

As this has been a long-duration disaster, our teams are providing varied services across the entire disaster cycle.  In some areas, we have transitioned from response to recovery but as wave after wave of severe weather has continued to occur, we have also been responding into newly impacted areas every day.

“This series of disasters have impacted communities in many different ways across all corners of the Empire State Division.  Literally, 1/3 of the division has been impacted.  Whether, the response was to flooding, wind damage or power outages, one thing has remained constant, the need to meet the needs of survivors where they are impacted.  Whether it’s a meal, a clean up kit or a person to talk to, our EDS teams have been there, keeping the survivor at the center of services and remembering our mission statement to meet human needs in His name.  I am truly humbled to see the selfless service of our volunteers every single day, many traveling hours from their own homes, to bring a helping hand and a listening ear to those in need.  Our own divisional headquarters has not been immune to the disaster, having been struck by severe weather this past Monday, causing multiple tree limbs to come down blocking our entrance and parking area and impacting our power and IT systems.  Early on Tuesday morning, staff from every department came in and helped clear the debris so that our services to those we serve across the state would not be interrupted.  This was not something anyone was asked to do.  Everyone just showed up and got to work.  This has been the story across the division during the last 27 days.  It has not mattered who it was, where the resources were or who they were assigned to.  One unified Salvation Army stepped forward providing everything we could to alleviate suffering. ” said Empire Division EDS Director Michael R. Schwartz

For further information or to help, please text "CNYFLOOD" to 41444 or go to http://bit.ly/cnyfloodrelief