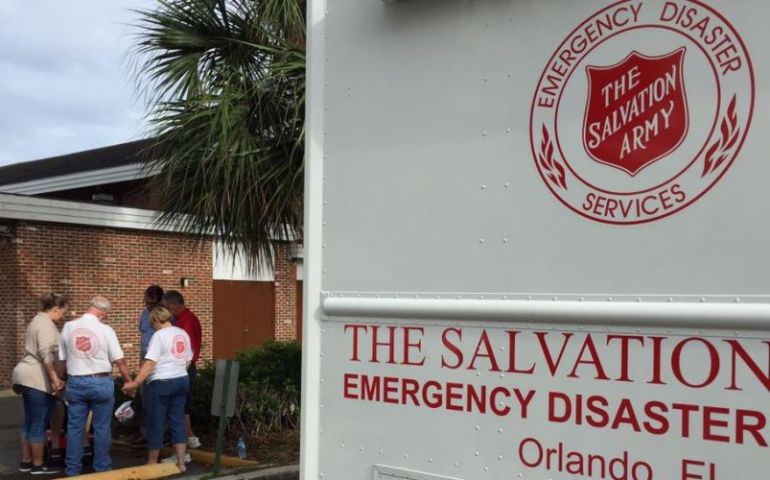 Orlando, Florida – Remnants of Hurricane Harvey continued dumping historic levels of rainfall on the Houston area Monday as devastating floods swamped the fourth most populous city in the United States. Rising water chased thousands of people to rooftops or higher ground. Heavy rain caused life-threatening, catastrophic flooding as search and rescue teams worked to help the thousands of people that have been forced to flee their homes.
Emergency Disaster Service volunteers in Orlando worked tirelessly on Monday to prepare its mobile feeding unit for deployment. The three-man crew is ready to assist with the largest mass feeding in United States history in the wake of the catastrophic flooding. Crew members are also prepared to offer emotional and spiritual care to survivors and first responders.

“The Salvation Army of Orlando’s mobile feeding unit deploys for Texas this morning,” said Major Ted Morris, the Area Commander. “Crew members are prepared and ready to serve on the frontlines for at least two weeks.”

Give relief to those affected by Hurricane Harvey:
·    Call 1-800-SAL-ARMY, text STORM to 51555 or visit www.helpsalvationarmy.org.
·    Visit www.disaster.salvationarmyUSA.org to register as a volunteer today.

###
About The Salvation Army of Orlando
The Salvation Army, an evangelical part of the universal Christian church established in London in 1865, has been supporting those in need in His name without discrimination for more than 96 years in the Orlando Area. Nearly 30 million Americans receive assistance from The Salvation Army across the United States each year through a broad array of social services that range from providing food for the hungry, relief for disaster victims, assistance for the disabled, outreach to the elderly and ill, clothing and shelter to the homeless and opportunities for underprivileged children. Eighty-two cents of every dollar The Salvation Army spends is used to support those services in 5,000 communities nationwide. For more information, go to http://salvationarmyorlando.org/.