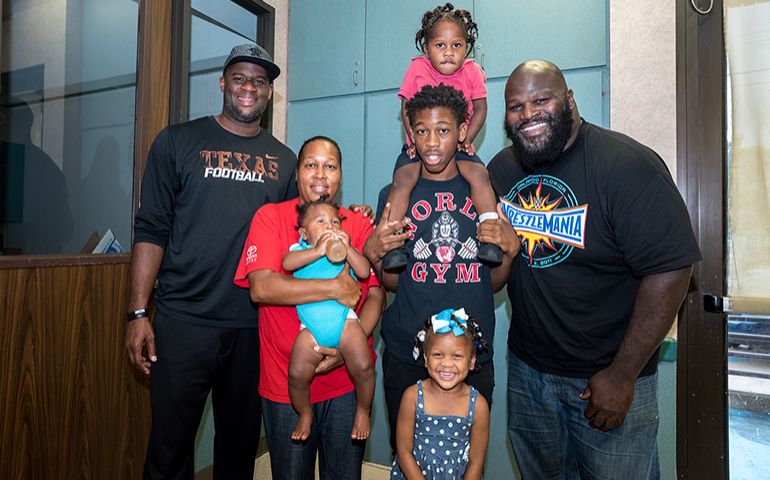 The Salvation Army of Greater Houston’s Family Residence provides a place of safety and healing for women and children. Many are escaping domestic violence, crime, and generational poverty. Others moved here to escape Hurricane Harvey. While the families work to put their lives back together, some special visitors offered an evening of respite.

“I’m a Houstonian. I feel the pain,” said Vince Young about the impact of the storm on his hometown. Young is a free agent, who played six years in the National Football League and college football for the University of Texas.  He, along with friend Mark Henry, a professional wrestler with the WWE, stopped by the Family Residence where they laughed and joked with dozens of children.

“I grew up with nothing.  My mom did the best job she could to make sure we didn’t know we were poor.  I had a happy childhood and I don’t want these kids to know about the strife,” said Henry. “I want them to persevere and have a smile on their face and know that there are people that care about them.”

Henry arm wrestled with the kids, who were amazed that they were winning at the game against a man who stands 6’4 and weighs 400 pounds. “I saw a lot of smiles today and it warmed my heart,” he said.

Family Residence staff member, Ruby Preston, said it was just what the parents and kids needed during this difficult time. “It really brought some cheer into their life,” said Preston.

Before they went home, Young offered this, “Stay strong. It’s going to take some time as we rebuild.  Know you are definitely in our prayers.  We love you. Whatever you may need, we are here.”