Camp Hope and The Salvation Army in Port Aransas, Texas 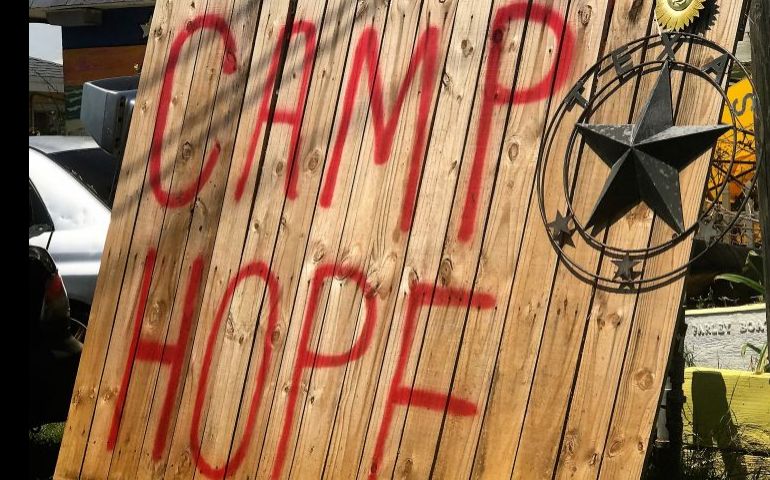 Corpus Christi, TX (September 8, 2017) – Port Aransas, a popular beach town in Texas, was pummeled by Hurricane Harvey.  The storm devastated homes and businesses, causing many to be displaced, jobless, and hopeless. Salvation Army personnel has been providing food, water, and emotional and spiritual care to affected residents at a fixed feeding site near the Port Aransas Ferry as well as a roaming feeding truck.

While distributing meals at this feeding site, Salvation Army disaster relief personnel met Darcy Trett, a Port Aransas resident who is providing a campsite for displaced Hurricane Harvey survivors on his property.

After Hurricane Harvey, Darcy returned to his home, a small motel he converted into an affordable housing facility three years prior.  Attached to 3rd Coast Inn on Station Street in Port Aransas, only one of these seven units Darcy manages were salvageable after the storm. Though the property lacks electricity, Darcy currently resides there with a generator to help keep himself and his three dogs cool at night.

After one of Darcy’s tenants returned to the facility and set up a tent in the courtyard, Darcy decided to provide lodging for others who lost their homes in the storm. Through advertisement on Facebook, several people displaced by Hurricane Harvey now utilize Darcy’s courtyard as a campground. There now hangs a large wooden sign over the property, designating the campground as Camp Hope.

Salvation Army disaster relief personnel have grown a bond with Darcy and the current occupants at Camp Hope, by providing them with daily hot meals for lunch and dinner and offering words of encouragement.  Darcy even plays music for the campers in the evening, enabling socializing and making the best of a bad situation.

Like Darcy, The Salvation Army is providing hope to the hopeless in the aftermath of Hurricane Harvey.

To help support the disaster relief work of The Salvation Army, donations can be made at www.helpsalvationarmy.org, by calling 1-800-SAL-ARMY, by texting STORM to 51555, or by check (designated “Hurricane Harvey”) mailed to PO Box 1959, Atlanta, GA  30301.