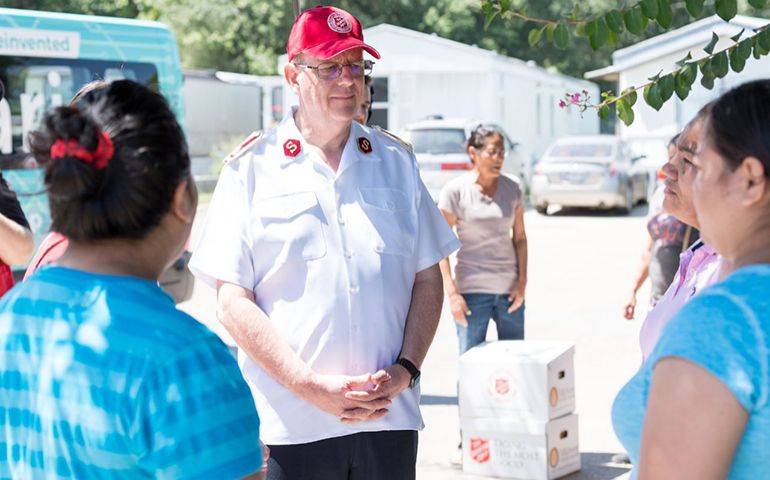 Houston, Texas (September 7, 2017) – The world leader of The Salvation Army, General André Cox, spent the day in Houston visiting with families impacted by Hurricane Harvey, as well as Salvation Army workers providing disaster relief. “It’s been humbling to see how The Army has been responding here in Houston. I’m not sure that I remember any time in recent history that we have had to mobilize just about all of our emergency response units on one incident,” said General Cox. “It is phenomenal to see the robust and energetic response that The Salvation Army is bringing here.”

General Cox began his day with crews preparing to head out on mobile feeding units to provide food, hydration, and emotional and spiritual care. Workers from across the United States and Canada continue to serve in Houston supporting efforts in the affected area. Twenty (20) mobile kitchens and response teams, with an average individual capacity to serve 1,000 meals per day, continue to provide hot meals, snacks, and hydration to Hurricane Harvey survivors, in addition to cleanup kits and other supplies.

General Cox was joined by Majors Kent and Melody Davis, Area Commanders for the Greater Houston Area Command, Lt. Colonels Ronnie and Sharon Raymer, Divisional Commanders for the state of Texas, and Commissioner Don Bell, Territorial Commander of the Southern Territory of The Salvation Army. After mobile feeding unit crews headed out, the General visited with families in a Houston community working to recover after severe flooding. Salvation Army mobile feeding units had been there for several days distributing meals, supplies, and food boxes. “I spoke with families who were devastated. It was especially frightening because these people were already vulnerable and living in the margins,” said General Cox.

After driving through Houston streets lined with trash and debris from homes in the process of clean up and repair, the General visited The Salvation Army Aldine Westfield Corps Community Center. Every day since the rains let up, the Corps Community Center has been feeding neighbors lunch and dinner. A place of comfort for the community, it also became a distribution center for food and supplies, such as hygiene kits, infant supplies, clothing, and towels and sheets. General Cox greeted the families waiting for much-needed relief and volunteers, “I am grateful for Salvationists who are mobilizing, who are working incredibly long hours trying to get the work done in impacted communities such as this one.”

The General’s last stop in Houston was The Family Residence in midtown.The center provides a place of safety and healing for women and children 365 days a year. Many of the residents are victims of domestic violence, crime, and generational poverty. In addition to the families already in the program, the Residence took in displaced families during this crisis. The General also had an opportunity to visit the adjacent Young Adult Resource Center (YARC), that addresses the needs of a growing number of young adults ages 18 to 25 experiencing homelessness.

Several times during the day, amid throngs of community members and disaster relief workers, General Cox offered prayers of comfort and inspiration, “We are concerned for those here addressing the aftermath of Hurricane Harvey because it’s not a sprint, it’s a marathon. They need prayer support. They need to know people are behind them praying. We want to be here, not just distributing meals for a couple of weeks and then moving on, but to be here to work alongside these people and support them in a journey that will likely take years.”