Sending Love and Supplies from Kansas to Texas 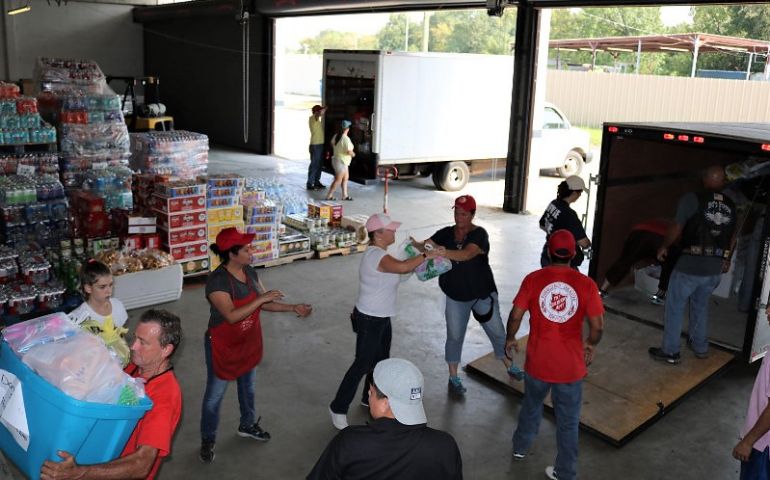 Dawn Robins has lived in Houston for 23 years although she is originally from southern Indiana. She is a proud graduate of New Albany High School, class of 1989. When Hurricane Harvey hit southeast Texas, she received several calls and messages from family and friends checking on her well-being. One such message was from a fellow New Albany class mate, Chief Tim Whitham, now with the Edwardsville Fire Department in Kansas.

“Once Tim found out we were safe and dry, he asked if we needed help. Only his “we” meant my Houston community,” said Dawn. In no time at all Dawn had given Tim a list of supplies that would benefit those affected by Hurricane Harvey and the resulting flooding.

By Tuesday, the entire community of Edwardsville was engaged in gathering supplies to send to Texas. “With so many road closures it was difficult to figure out the logistics of transporting the supplies into Houston. That’s when we realized that the Beaumont area had also been devastated and that people were in desperate need,” said Dawn. Despite the additional travel time involved, Tim agreed to divert the delivery to the Beaumont where people were without electricity and water, and there was extensive flooding.

“I reached out to The Salvation Army to ask if they could accept the donation and was quickly put in touch with the local unit in Beaumont,” said Dawn. “The Salvation Army has an excellent reputation and I grew up seeing them at work in my community. As my friends and I try to find organizations worth donating to, we easily see the value of each dollar that goes to the people being served by The Salvation Army.”

By Sunday afternoon, Tim and Dawn were driving into Beaumont in the distinctive red suburban from the Edwardsville Fire Department, pulling a 14-foot trailer crammed full to the roof with supplies.  Seeing the familiar Salvation Army red shield on the building, they pulled into the parking lot and were greeted by Captain Jose Marquez, from Hopkinsville, Kentucky, who came to Beaumont as part of The Salvation Army relief team.

“The donation from Edwardsville was a huge help as we began to serve the practical needs of this community," said Captain Marquez. "Many of the people we are serving have lost everything and thanks to this generous donation, we were able to give them toiletries, diapers and baby products, and clean clothing. They also brought notes of encouragement and cards from the children at Edwardsville Elementary School. Thank you!”

“Captain Marquez was wonderful. He made sure we had plenty of volunteers to help unload the truck,” said Dawn. “Our hope is that our donation will provide people with the security of knowing they won't run out of baby diapers, will be able to brush their teeth, have clean clothes, feed their families, and have dignity while trying to put their lives back together,” said Dawn. “Thank you, Salvation Army, for what you are doing to help people in need."