Emotional & Spiritual Care Speaks to the Hearts of Houstonians 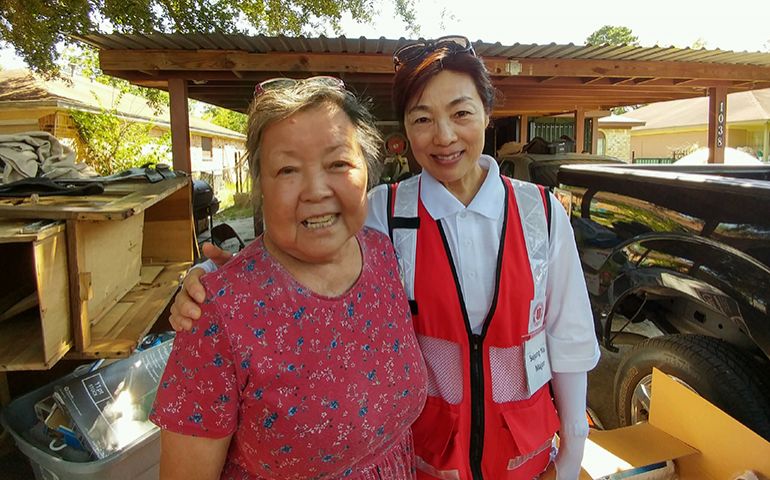 As Houstonians continue with the arduous task of putting their lives back together in the wake of Hurricane Harvey, The Salvation Army’s Emotional and Spiritual Care (ESC) givers are on the front lines offering prayer, comfort and hope. Majors Jamie Pennington, and Sujung Na are among dozens of Salvation Army officers serving on the ESC team in Houston.  They are dispatched to the hardest hit areas of the community where the streets are lined with piles of junk - – water-logged mattresses, floor boards, dry wall, appliances, furniture, clothing, and memories. Entire lives reduced to rubble.  Such was the case when the Majors met The Black family.

“They had all of their earthly possessions scattered out to the curb,” said Major Pennington, of New Albany, Indiana. “There were two vehicles there that were destroyed. They had no transportation. They couldn’t get out of their neighborhood.”

The family of five adults and a 10-month old baby had only one cot among them. The child was sleeping on the cot. The adults were on the floor.  They had no pillows or clean bedding. Their single story brick home had been flooded with two feet of water during the storm.

“We gave them a food box to start,” Pennington said. “I knew back at the warehouse there was a crib and a playpen.”

They returned not only with a crib and a pack-and-play. They also brought diapers, cots, pillows and sleeping bags. The family was overwhelmed with joy. That’s when the 75-year-old grandmother, Akiko, a native of Japan, opened up to Major Na, who is of Korean descent and speaks Japanese. Akiko was just two years old, living in Hiroshima, Japan, when the US dropped the atomic bomb. She survived unscathed and moved to the US at the age of 32.

“I said God is in control of your life and everybody’s life. We all die one time, but God has spared your life,” explained Major Na of The Salvation Army’s Atlanta International Corps. “I said ‘Do you know Jesus?’ and she said ‘No. I have only been to church a few times when the children were having an event.’ So I said, ‘Do you want to receive Jesus?’ and she said ‘yes.’”

“So I prayed in Japanese and she repeated after me,” Major Na said. “Then I told her that Jesus is in her heart and she should find a church.”
The family eagerly took down the information for the nearest Salvation Army Corps Community Center. Although the steps to recovery from the storm will be slow, they assured the officers that they will attend a worship service as soon as they are able.

“They were so happy and grateful for The Salvation Army,” said Major Na. “Then Akiko told me ‘I know who I have in my heart now.’ She was ready. God spoke to her heart.”