Help is Here in Houston 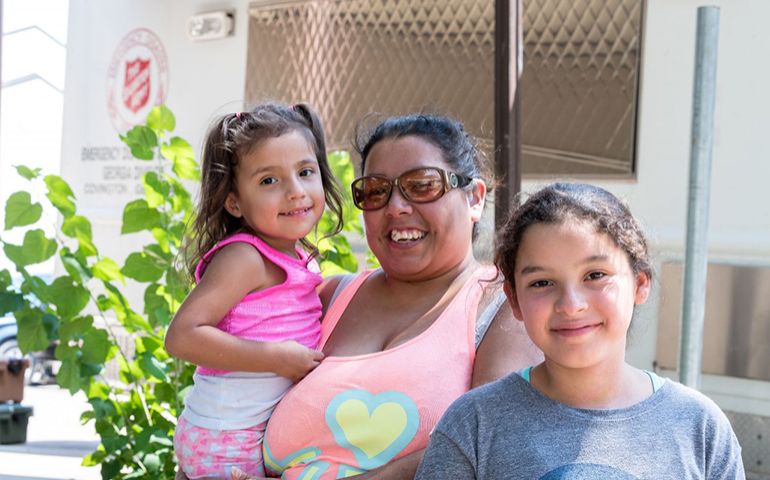 Houston, Texas (September 8, 2017) – Caroline and Victor Martinez had their hands full during the past year. Raising their own four children on one income, along with two nieces and one nephew, was a real struggle. Their home in Fort Bend was flooded following a 20-inch rainfall in May 2016. After the flood, Victor had a heart attack that Caroline attributes to the stress of losing everything in the flood and attempting to rebuild. The family of 10 has been living in a trailer provided by FEMA since last summer.

When news of Hurricane Harvey reached them, the Martinez family didn’t wait for the water to rise before evacuating the trailer. Through the pouring rain and suffering from health conditions, Victor got everything out of the trailer and into a storage unit to keep things safe and dry with the help of their teen son. “I told him not to worry, that we can replace some of the stuff,” remembered Caroline. “But he said, ‘we just bought all those clothes for the kids and we can’t afford to lose them’.”

The family found temporary refuge at the home of Caroline’s brother. They stayed with his family of four, in his two-bedroom home. At this point, 14 people plus pets were sharing the house built for four. Water was coming in along the carpet in the living room. “You’re not in your own space. We’re crowded. There is no room to move around. But the hardest part,” remembered Caroline, “is worrying if we are going to be able to go straight back home; If there would even be a home there to go back to. Also, worrying if my husband would have a job waiting for him.”

Their trailer was in fact flooded. Once the flood waters receded, FEMA placed them in the Motel 6. They continue to work on rebuilding their home damaged from 2016. “We gotta start all over again,” said Caroline. She found out about The Salvation Army mobile feeding unit visiting Fort Bend from a friend. She brought two of her children with her to get meals, clothes, cleaning supplies and found information on other help The Salvation Army provides. “We are not the type or people to ask for handouts or ask people to help us. We’re trying to be strong for our family,” said Caroline. “People we know say, ‘you all have big hearts and take people in and live in an RV; You gotta get help and you don’t even have to ask’.” It’s true. For the Martinez family and thousands like them across Greater Houston, getting help is not a privilege for the few. It is available for all.