Food and a Friendly Face in Port Lavaca, Texas 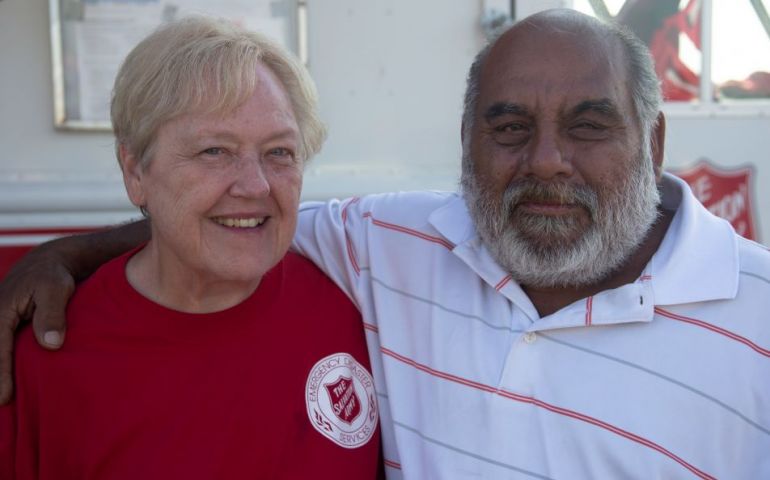 Port Lavaca, Texas (September 10, 2017) - On a normal summers day in Port Lavaca a cool breeze blows gently off the bay. It’s usually a welcome respite from the Texas heat and mugginess. But when that breeze is a hurricane-force wind brought by Hurricane Harvey, it is much less welcomed. In Port Lavaca, the wind and water decimated apartments, houses, trailers and businesses with a one-two punch.

Two weeks after Harvey made landfall, utilities have been restored to the area and residents are returning to survey the damage and begin cleanup. They’re finding broken windows, damaged roofs, water-logged walls and carpet, and dangerous mold. Some renters are even finding that their landlords have given up on the properties and they’re left on their own to make repairs.

The Salvation Army has been there serving the area since the hurricane, providing meals, clean-up kits and emotional comfort to aid in the efforts.

Johnny Ocanas, 63, rode out the storm inside the largest of his four trailer homes. “It was really scary, but I had no money and no place to go,” he said. “I figured I’m 63 years old. I’m either going to live or die.”

Ocanas said at one point the wind picked up his trailer nearly two feet in the air and dropped him straight down. “I was up and then ‘boom,’ I was down. And the roof bent inward. The pipe for the water broke in half.” All four trailers have been so damaged that he has been sleeping in his truck.

He said the few bright spots in his life now include The Salvation Army’s volunteers serving hot meals and snacks twice a day in the community center parking lot. “They’re friendly. And the food is good,” Ocanas said.

Volunteer Janet Harrison, of Waco, is serving on canteen in Port Lavaca. She said Ocanas has been by every day, but this was the first day he gave her a hug. “He’s a nice man. We’ve talked before, but this is the first time he’s actually put his arm around me. I think he’s really starting to trust us and think of us as friends.”

Ocanas isn’t sure what his future holds. “I don’t know what I’m going to do yet. But I thank the Army for their help.”