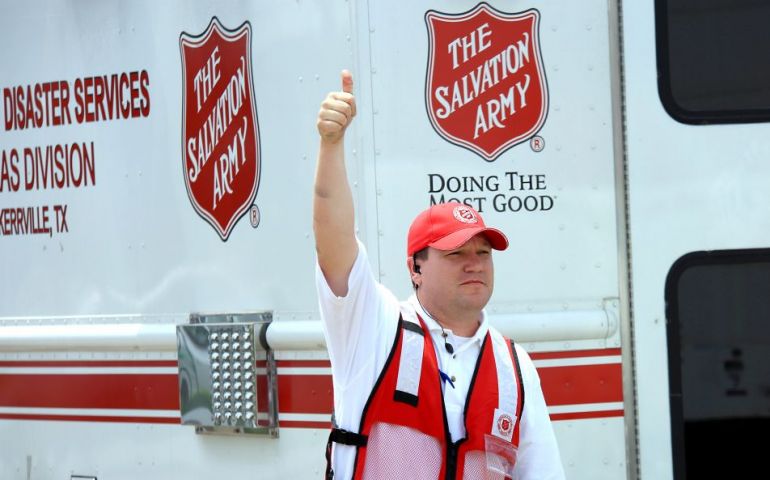 ATLANTA, GA (September 12, 2017) – The people of Georgia hunkered down as a weaker, but still fierce, Irma cut a path of destruction through Georgia last night and into the early morning. In her wake, Irma left downed trees and power lines that left many without power and damage to homes and businesses. Before and during the storm, The Salvation Army was serving at 33 shelters across the state. Today is a day of continued service and assessment for The Salvation Army to determine how best to counter Irma’s impact.

As The Salvation Army's Georgia Incident Command Team (ICT), located in Atlanta, assesses Irma’s impact, they will determine the best deployment of the Georgia Division's 18 mobile kitchens (canteens). Most canteens were already pre-staged ahead of the storm for quick response to anticipated areas of impact.

“Every team being deployed in Georgia can provide food, hydration, and emotional and spiritual care to those impacted by this weather event,” said Major Charles Powell, Divisional Commander for The Salvation Army in Georgia. “We’re uniquely positioned to provide support and relief to impacted areas throughout the state.”

An Incident Command Team deployed from the National Capital/Virginia Division arrives Wednesday with eight canteens to help with relief efforts in Georgia. Assessments are underway to determine the best deployment of these resources.

“The Salvation Army in Georgia is ready to respond aggressively and serve compassionately to help those impacted by Irma,” said IMT Commander Major Douglas McClure,  “We hope to send multiple feeding units in the coming days to support the residents of each community who need help and hope. Our love and prayers go out to each of them."

Those who want to help people directly affected by recent hurricanes are asked to donate in the following ways: