Welcoming Those Returning Home with a Hot Meal and a Smile 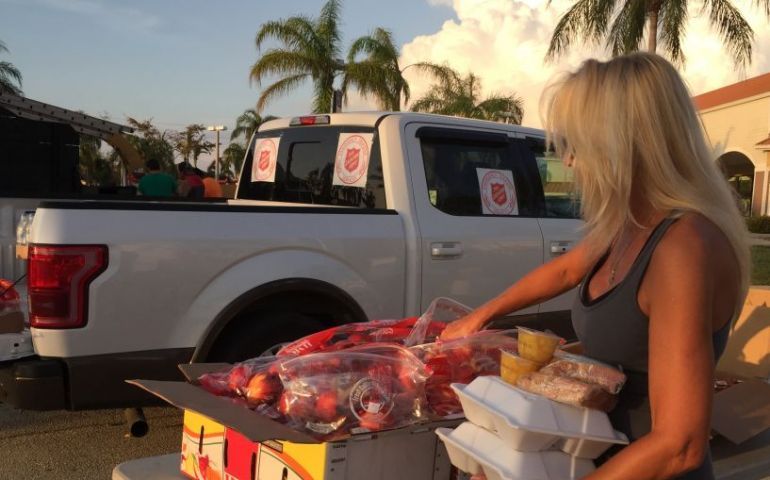 (Marco Island, Fla.) Sept. 13, 2017 -  The tiny community of Marco Island looks like a ghost town. Homes are boarded, hurricane shutters are drawn, big trees uprooted from the earth and the palm trees that once danced in the wind have fallen onto the street.

In the wee hours of Sunday morning, Hurricane Irma made its landfall onto this 24-square mile island and then roared up the west coast.

“My sister’s name is Irma,” said Nestor Cifuentes, who was picking up a meal from The Salvation Army’s mobile kitchen stationed in a Publix parking lot on Barfield Drive. “I always knew she was a hurricane.”

Cifuentes compared Hurricane Wilma in when it hit nearby Palm Beach to Irma.

“But that was nothing compared to the sound Irma made,” he added.

Leslie Sanford was hunkered down at the Marco Island Emergency Operations Center when Irma hit.

“I was in a little closet,” she said. “We don’t have power or water at our home, so I’m grateful for you all.”

Sanford took few bottles or water and a plate of spaghetti for dinner.

“A lot of people evacuated,” she said. “People are just now coming home. They will find their homes without power and water. It’s a blessing you all are able to provide.”

There was a steady stream of vehicles by the canteen on Wednesday evening as cheery volunteers greeted them.

“Would you like a hot meal,” said Mandy Fulton, the development director for The Salvation Army of Lakeland. “Please take some for your family, too.”

“I felt called to be here,” she said as she greeted people near the canteen. “There’s no place I’d rather be.”

Wednesday’s dinner – spaghetti, mixed vegetables and an array of snacks – hit the spot for John and Gloria Liimatta, who just returned to their home from evacuating.

“This is our first hot meal since Friday,” Gloria said. “I’m sure it will be the best spaghetti I’ve ever had – and I’m Italian.”

All 47 Salvation Army units – from Pensacola to south Florida – are assisting and serving residents in need. The Salvation Army has prepared and distributed more than 330,000 meals statewide since September 8, when it began its relief and recovery efforts. The teams are now transitioning into response, establishing staging areas across the state, which include Naples, Fort Myers, Key West and Keystone Heights. The Salvation Army has more than 3,000 trained volunteers and staff in Florida, ready to offer a warm meal, bottled water, coffee or offer emotional and spiritual care.

The best way to help survivors and relief workers is to make a financial contribution. Monetary donations allow disaster responders to immediately meet the specific needs of disaster survivors as the need continues to be assessed. The Salvation Army asks people who want to help those directly affected by the storm to visit helpsalvationarmy.org, call 1-800-SAL-ARMY or text “Storm” to 51555.