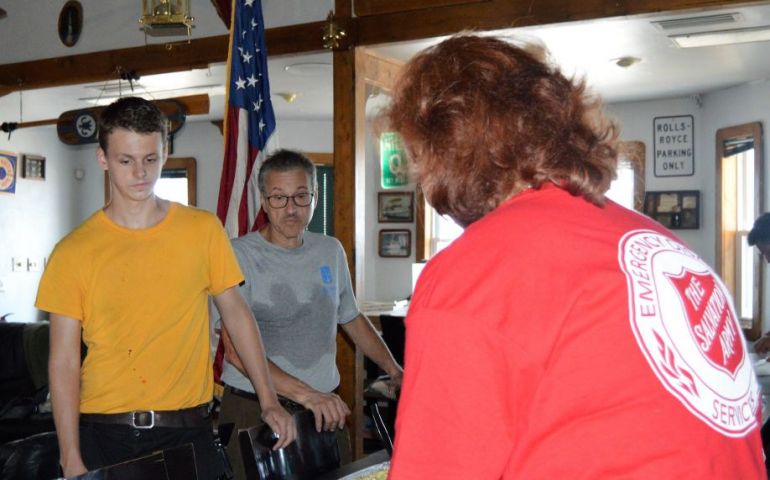 Jacksonville, FL (September 15, 2017) - When Hurricane Irma blew through Jacksonville, Safe Harbor Academy lost power. Four days later, they were still without power and running low on food they could prepare for the 20 boys who call Safe Harbor home. The school reached out to The Salvation Army for help.

Safe Harbor is a Christian boarding school for at-risk boys ages 14-17 years old. Each boy in the program lives on his own donated boat in the harbor. Preparing the boys for life is a priority throughout the program. Geometry is learned through the sails of the boat. Life lessons are taught through boat life: lessons such as how boat repair can be like repairing your life and how the effort you put into it determines your results. The boys are also taught woodworking, welding, and other practical skills that are needed to maintain a boat.

When Hurricane Irma approached some boys felt anxious. Some had never experienced an evacuation before. Some were just settling in with their new boats, and then they worried about what would happen to the boats. But Safe Harbor staff used the hurricane as a spiritual and life lesson.

“We used Hurricane Irma as a lesson to teach the boys spiritual lessons that could be intertwined with the practical,” said Robbie Smith, founder of Safe Harbor. “The evacuation was a lesson in how to prepare and think through details.”

Some of the boy’s boats did get damaged. One sank.

When The Salvation Army employees from The Salvation Army Jacksonville Area Command received the call, they began to plan their service. The Jacksonville Salvation Army has a special connection to Safe Harbor— the head chef for The Salvation Army's Towers Center of Hope is a graduate of the program. With special care, he planned a meal of sloppy joes, cole slaw, and potato salad, with plenty for second helpings. The team was greeted with hugs and a few tears, as they had been beginning to worry about what they would do to feed the boys.

“The kids really needed a hot meal – they have been working hard cleaning their homes (boats) and pitching in to help the other boys,” added Robbie. “Thank you for being here for us.”