Mercy Chefs Do The Cooking in Rockport, Texas 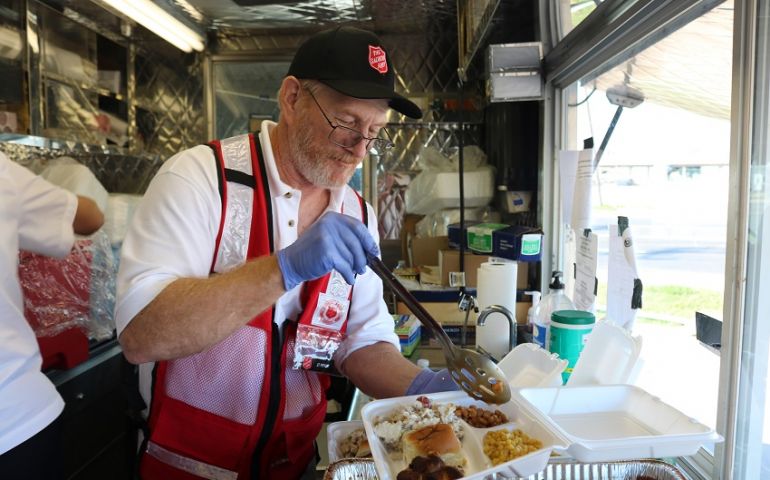 Rockport, Texas (September 17, 2017) - The Salvation Army mobile feeding units are strategically stationed across the country, ready to respond to emergencies of all scales with the capacity to distribute hundreds of thousands of meals. Since Hurricane Harvey devastated Texas just three weeks ago, The Salvation Army has utilized these vehicles to provide more than 580,000 meals.

To support emergency response operations, especially during large-scale disasters, The Salvation Army works with a number of partner organizations to supply the food and prepare the meals for these units.

Mercy Chefs is a faith-based, non-profit disaster relief organization that serves professionally prepared meals for survivors, volunteers, and first responders in national emergencies and natural disasters. In emergency deployments, Mercy Chefs station their kitchens at local churches and coordinate volunteers to support their operations. In Texas, The Salvation Army’s largest scale partnership to date with Mercy Chefs took place in April 2016 in response to the Tax Day Floods in Houston.

This year, The Salvation Army and Mercy Chefs have joined forces again, providing more than 34,000 meals for people in Rockport, TX. “The Salvation Army’s roaming vehicles allow us to expand who we are, feeding to people that are displaced,” said Lisa Saylor, Managing Chef of Mercy Chefs in Rockport. “The partnership works out well.”

“The Salvation Army’s relationship with Mercy Chefs has ensured the success of delivery of service in Rockport during our response to Hurricane Harvey, and in several other places facing a crisis in recent years,” said Alvin Migues, Emergency Disaster Services Director for The Salvation Army in Texas. “Collaboration is key to effective service and The Salvation Army is delighted to work with, and for the support of Mercy Chefs.”

The Salvation Army has provided 585,727 meals, 582,686 snacks and 642,066 drinks to first responders and survivors in response to Hurricane Harvey.