Volunteer Discovered Passion to Serve Others at The Salvation Army 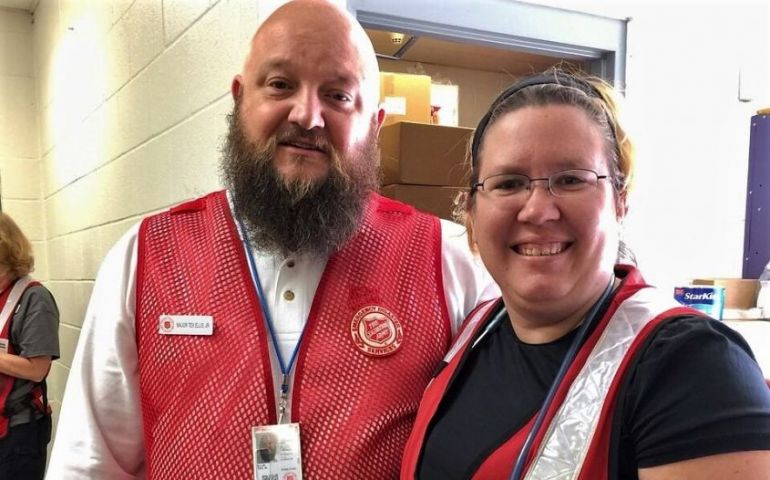 Dallas, Texas (September 18, 2017) – Staci Forester watched the forecast and reality of Hurricane Harvey unfold from her home in Ohio, as the storm caused devastation along the Texas coastline. The impact and catastrophic effect on Texans struck home with Staci, as she grew up in Fort Worth and has many family and friends living in the Lone Star state.

Staci is a nurse with a background in emergency medical services, and first registered as a Red Cross volunteer in May 2017. “A few days after Hurricane Harvey hit, the phone rang and I was asked by the Red Cross if I would be willing to deploy and serve in Houston,” said Staci. “Of course, I said yes. I have family and friends in Texas and wanted to help those in need because I know that if something happened that affected my family, I would want someone to help them.”

While volunteering in Houston, Staci unexpectedly met Major Tex Ellis Jr. and the team of Salvation Army volunteers providing meals at a shelter in Kendleton, a small community in Fort Bend County. Staci said this brought back wonderful memories for her, as she grew up attending The Salvation Army church in Fort Worth where Major Ellis’ parents were the Corps Officers (pastors). “I loved going to church at The Salvation Army and I remember attending summer camp at Camp Hoblitzelle. I learned so many things there,” said Staci. “I learned to read music and play the trumpet and I remember my favorite camp activities were horse riding and swimming.”

Staci learned other lessons as a child at The Salvation Army that she has taken to adulthood. “My first experience as a volunteer was at The Salvation Army and it was there that I learned that I have a passion for serving people,” said Staci. “I know that as a Christian I am expected by God to treat others as I would want to be treated and that I should serve those in need. As it says in Matthew 25:40, ‘Whatever you did for one of the least of these brothers and sisters of mine, you did for me.’”

Staci volunteered in Houston for 14 days before returning home to her family in Ohio. Reflecting on her chance encounter with Major Ellis, Staci said, “It was such a blessing to meet The Salvation Army team and to see Major Ellis again after all these years. I am thankful for everything The Salvation Army taught me as a child and teenager.  That foundation and start in life instilled in me a passion and calling to help people.”

As of September 18, The Salvation Army has served 629,250 meals, 607,284 snacks, and 682,511 drinks statewide in response to Hurricane Harvey. Emotional Spiritual Care Officers have spoken with 27,167 first responders and survivors.