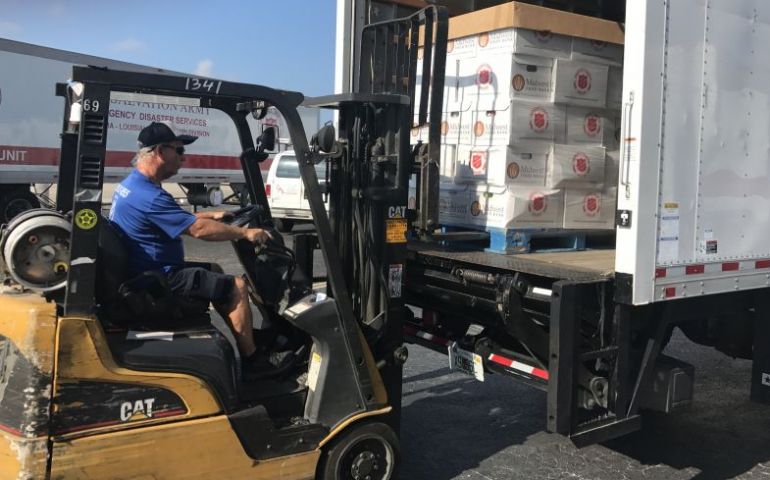 As a First Responder for The Salvation Army, Midwest Food Bank has been getting relief to the people in Florida stricken by Hurricane Irma. Six loads of relief products have been delivered from Illinois, where the company is based, and more have been ordered and will be shipped. In addition to that, the Fort Myers division of Midwest Food Bank has been doing some hands-on distribution. Water and other beverages have been distributed in some of the hardest hit areas. One semi-load of water, nearly 1,300 cases have been handed out in Immokalee, prompting one survivor to say, “God has brought water to Immokalee today.”

The primary areas The Salvation Army of Fort Myers will be serving in the following days are in Hendry County, which includes Clewiston and LaBelle, and Lee County which includes Bonita Springs and Lehigh Acres. “We are at the point of a transition from an immediate critical need to sustained need,” said Bob Poff, Operations Program Director of The Salvation Army Fort Myers Area Command. “We’ve been serving prepared food because hurricane survivors haven’t had the ability to make their own.”  As power returns however, many will return home and have the capability of cooking and the food boxes will get them started. Food boxes will sustain a family of four for up to five days and contain some essentials like toilet paper, crackers, peanut butter and a few special items as well like pasta, sauce, mac and cheese.

“Midwest Food Bank is committed to serving our friends and neighbors in southwest Florida,” said Jane Williams, Executive Director of the Fort Myers division. “When the winds calmed down, we had boots on the ground.” As a faith-based organization, it is the mission of Midwest Food Bank to alleviate hunger and poverty by gathering and distributing food donations to not-for-profits and disaster sites without cost to recipients.