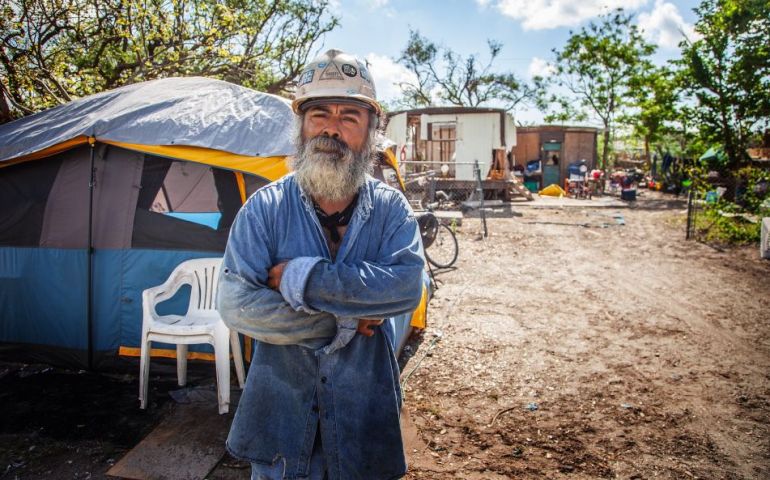 Corpus Christi, Texas (September 30, 2017) - Ramone and Suzie Ortiz are long-time residents of Aransas Pass. They have lived in the same house in the small coastal community for 27 years. Today, following the devastation caused by Hurricane Harvey, they are living in a tent in their front yard in the shadow of their destroyed home.

Ramone is a laborer and cannot afford to have a contractor rebuild his house. With few other options, the couple plan to continue sleeping in the tent until they can come up with the money to rebuild. They spend their days in the shade under a tarp tied to trees, without electricity, air conditioning or any of the other conveniences so many take for granted. Before the hurricane hit, their son, daughters and granddaughters also lived with them. The tent is not big enough to accommodate everyone and so the family members have been forced to find other places to stay.

Each day, Ramone, Suzie and their neighbors look forward to the arrival of The Salvation Army mobile feeding unit. To those who have lost so much, the hot meals and warm conversation have come to mean a great deal. The Salvation Army volunteers take time to listen to the survivors’ stories, and provide encouragement and comfort to many who feel like they have been forgotten.

On the other side of town, Diana Bower, 73, is living in a borrowed camper parked on her property. She evacuated before the hurricane made landfall and later returned to find her home missing its roof and sides, with almost all the contents broken or missing. Diana proudly told the story how she bought her trailer home 57 years ago with her own money as a surprise for her husband, who later built on additions to make more room for their growing family.

Over the years, Diana has collected many treasures, most of which were lost in the storm. The only thing still standing in her dining room, that no longer has a roof, is her china cabinet—with all the china still intact.  Many of her possessions that were lost hold significant sentimental value to Diana; reminders of her husband who passed away many years ago.

The Salvation Army mobile feeding unit continues to visit Diana’s neighborhood, and others in Aransas Pass, serving meals and cold drinks to those working so hard to piece their lives back together.

As of September 30, The Salvation Army has served 862,578 meals, 898,295 snacks, and 925,455 drinks statewide in response to Hurricane Harvey. Emotional Spiritual Care Officers have ministered to 51,724 first responders and survivors.