The Salvation Army in Mexico Continues a Multifaceted Disaster Response 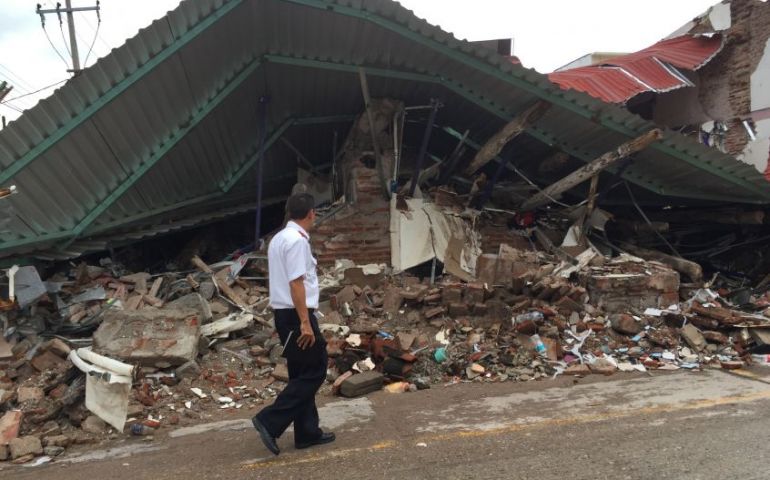 London - Generous donations and tireless volunteers are allowing The Salvation Army in Mexico to respond to disasters across the country after Mexico was hit by two major earthquakes and a hurricane within less than two weeks.

In early September, after receiving warnings about the damage likely to be caused by Hurricane Katia, The Salvation Army sent two canteens to Veracruz. However, before the hurricane could make landfall an earthquake measuring 8.1 magnitude on the Richter scale struck off the south coast of Mexico on 7 September, causing extensive damage in Oaxaca state.

The Salvation Army has no permanent presence in the region but immediately sent its two remaining canteens there as well as an officer, Major Alberto Gonzales (regional emergency coordinator) to oversee the operation. The Army decided to focus on a town called Juchitán and worked in close partnership with 32 other churches. For two weeks following the earthquake 21,000 meals were served by The Salvation Army on a daily basis from seven food distribution locations and using the canteens. The earthquake-affected people cooked the meals themselves, with ingredients provided by The Salvation Army.

Hurricane Katia made landfall in Veracruz on 8 September but, fortunately, the damage was not as bad as anticipated. Nonetheless, The Salvation Army responded to support people in need and provided 200 meals daily for four days. It also gave food parcels of non-perishable items to 120 families.

With the relief operation in Oaxaca still under way the territory faced a third disaster within a short period of time, when a 7.1-magnitude earthquake struck near Mexico City on 19 September, causing damage and loss of life throughout Mexico City and the states of Morelos and Puebla.

The Salvation Army’s territorial headquarters as well as some of its other centers opened immediately to offer support. THQ is still being used as a donation collection centre.

Relief operations in the city center were undertaken by four Salvation Army churches (Corps 1, Corps 3, Nueva Atzacoalco and Cocotitlán). Coffee, water, sandwiches and other refreshments were provided to rescue workers and affected people.

Because meals and drinks were being offered by hundreds of volunteers throughout the area, it was decided to reduce this kind of operation after four days. Corps 1 is still going out every night for several hours with coffee, snacks and the willingness to listen to affected people who are now living on the streets.

In addition to the relief activities in the city center the Salvation Army started relief operations in Pueblo, where it is still providing 300 meals a day, and in four locations in Morelos, where 1,500 meals are being served on a daily basis.

The Salvation Army has been blessed with more than 17 tons of donations, ranging from non-perishable food items, drinking water, hygiene articles and cleaning products. A private donor gave generators and motorbikes, which are a great asset in the current disaster response – especially as there have been times when The Salvation Army has had to work without electricity and in places that were inaccessible by car – but will obviously also help the territory to upgrade its preparedness ahead of future disasters.

The local response has been remarkable. In addition to providing material help, more than 400 people have volunteered with The Salvation Army, offering help with a variety of tasks, including the sorting of distributions, administration, public relations, serving food and other items, and clearing rubble.

In some places the relief activities are slowly winding down, but in others they will continue for another couple of weeks. However, the focus is now shifting towards recovery. The earthquakes have left many people homeless and thousands are now sleeping under tarpaulins on the streets, many of them in front of what is left of their houses. The Salvation Army continues to assess the needs and to raise funds that will enable to it to help as many people as possible to rebuild their homes and lives.

Donations can be made online at http://sar.my/amappeal

Photos of the response can be downloaded from the IHQ Flickr stream: http://sar.my/mexvol