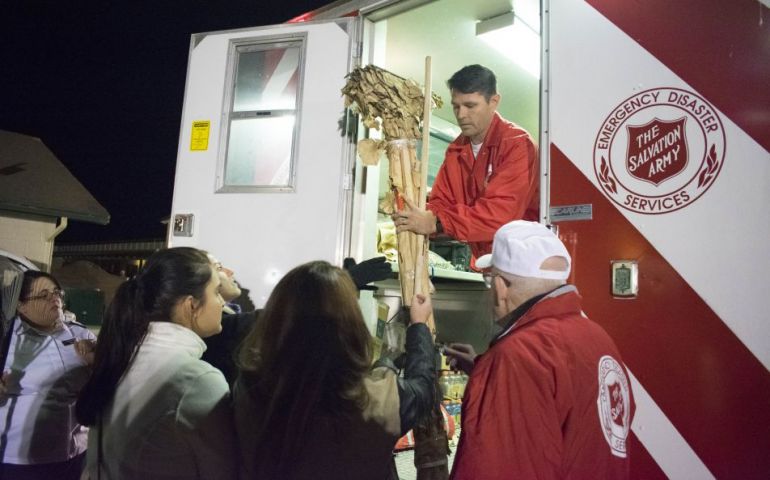 Providing care to evacuees at the Del Mar Fairgrounds

San Diego, CA (December 8, 2017) - The Lilac Fire in North County continues to grow fierce and is cause for evacuation numbers to continually increase. As of 9:20 am this morning, the fire had burned 4,100 acres and was 0 percent contained, with 65 structures destroyed.

The Salvation Army was on high alert since the beginning of fires and has ramped up response as needs arose. The Salvation Army began response last night, providing water, food, ice, shovels, rakes, tubs, eye hooks, phone chargers and spiritual support at the Del Mar Fairgrounds evacuation center for large animals. The fairgrounds has hundreds of evacuated large animals and their owners.

After seeing the need, The Salvation Army plans to expand its outreach and respond to volunteers, evacuees and first responders, and continue to serve those affected by the fire for as long as necessary. Fire survivors may receive Salvation Army Thrift Store vouchers to purchase clothes, furniture, dishware, and other household items.

To support The Salvation Army and their fire relief efforts, go to sandiego.salvationarmy.org or call 1-800-SAL-ARMY.

Those wishing to help can:
Drop change, dollars or even a check into the Red Kettles
Give online at sandiego.salvationarmy.org
Mail a check to The Salvation Army
2320 Fifth Ave. San Diego, CA 92101
Call 1-800-SAL-ARMY (2769)