Giving Salvation To Those In Need 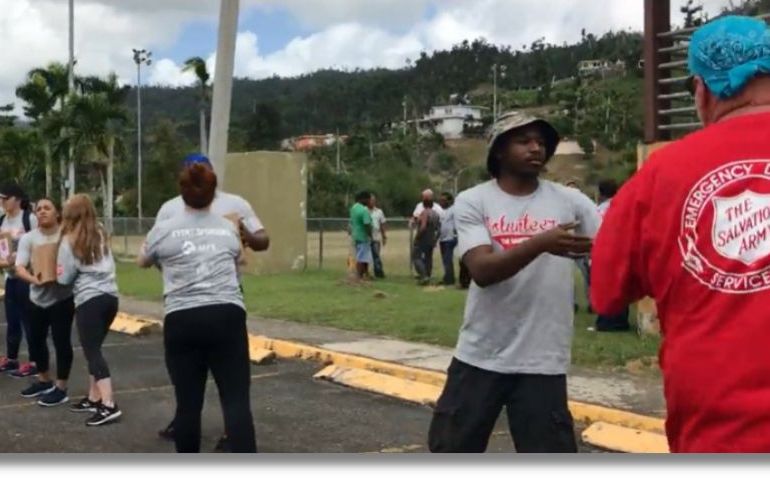 Maunabo, Puerto Rico - On a typical warm and humid day in Puerto Rico, Akeem Cadogan, a Salvation Army volunteer, who had deployed from Massachusetts, worked the forklift at The Salvation Army’s warehouse in Caguas as others in the team filled food boxes to be distributed to hurricane survivors later that afternoon.

Cadogan was excited to travel to Puerto Rico and help out disaster survivors with his friends, and to do good together. He was able to use the skills he learned as a Home Depot forklift operator to help out around the warehouse, loading trucks for deliveries around the island. “It’s something easy that I used to do,” Cadogan said, “I really enjoy it.” After the truck and cargo van were filled with much-needed supplies, The Salvation Army’s Massachusetts Division College Group hopped on board a passenger van and minivan to begin the long drive to Maunabo.

It was there that over 300 people arrived for the distribution, located in the parking lot of a local ballpark. Many of those in need arrived early, and stood in the hot sun anxiously awaiting The Salvation Army delivery. They were tired, and in these remote areas have survived over six months without power. As a hallmark of The Salvation Army, spiritual support was provided, along with the essential supplies--providing hope, love, and strength.

Kevin Hylan, an employee of The Salvation Army, served by passing out needed water and food boxes that would feed a family of four for one week. “Everyone wants to be part of something that is helpful, serving God and just helping out,” Hylan said. “It’s an opportunity for us to get to know each other better, and to give back to people that lost so much.”