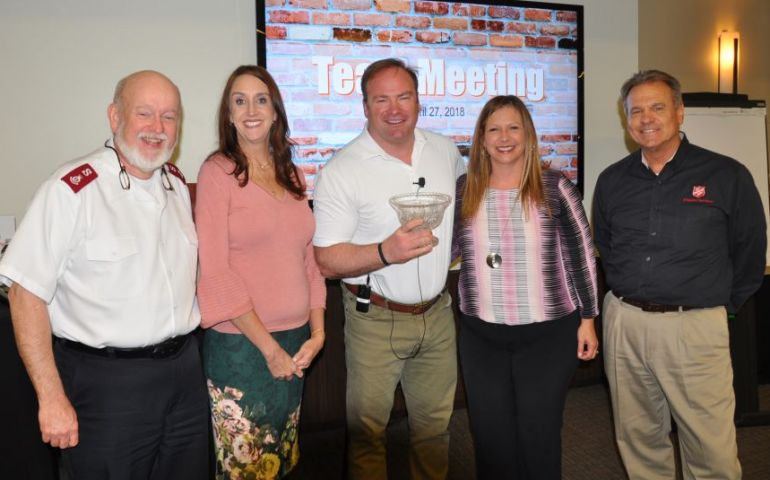 Dallas, Texas – The Salvation Army of Texas made a “Hurricane Harvey Partners Award” presentation to Keller Williams and KW Cares at their Corporate Headquarters in Austin on April 27. This award recognizes the dedicated and selfless work of Keller Williams employees and agents during Hurricane Harvey relief efforts and the company’s ongoing commitment to serve those in need.

On August 25, The Salvation Army Emergency Disaster Services (EDS) immediately responded when Hurricane Harvey struck the Texas coastline, providing food, hydration, and emotional and spiritual care to survivors and first responders. At the peak of service 103 Salvation Army mobile feeding units were working in affected areas delivering more than 950,000 meals, 33,000 food boxes, 92,000 comfort kits and 15,000 cleanup kits in the months that followed. This overwhelming scale of The Salvation Army relief efforts, not seen since Hurricane Katrina, would not have been possible were it not for the support of partner agencies like Keller Williams and the KW Cares team.

The Salvation Army has been privileged to work with Keller Williams on collaborative efforts to better serve those affected by disasters, including most recently, Hurricane Harvey. “During Hurricane Harvey we participated in daily conference calls with the KW Cares team in Austin as well as their representatives on the ground,” said Alvin Migues, EDS Director for The Salvation Army in Texas. “KW Cares enlists the aid of thousands of their agents and employees who volunteer to assist in times of need.”

At the height of Hurricane Harvey response Keller Williams had their Mega Camp scheduled in Austin. This annual four-day training event brings together thousands of their agents from around the globe. In light of the fact that a large-scale disaster response was taking place along the Texas coastline, as well as in their own community, Keller Williams chose to forego their normal activities. Mega Camp became operation Mega Relief!

“As we were talking to the Austin Convention Center representatives about the possibility evacuees would be housed there, it became clear to us that doing what we could to help those affected by the storm was more important, and we made the decision to pivot our focus on the relief effort in our own backyard,” said Darrell King, Keller Williams’ COO.

Instead of the scheduled real estate training workshops and panel discussions, Keller Williams agents worked in Austin with local emergency managers and local businesses to gather supplies and raise money to support relief efforts. Additionally, Keller Williams bused more than 3,000 associates and family members from Austin into the affected communities along the coast to work on relief projects and assist with the grueling task of clean-up and home mud-outs.

“Looking forward, we are developing a plan for local Keller Williams teams to come alongside The Salvation Army EDS teams to support logistically and as a force multiplier in our response efforts,” said Migues. “It has been our distinct pleasure working with a group of people as dedicated as the KW Cares team and we look forward to working with them in the future.”