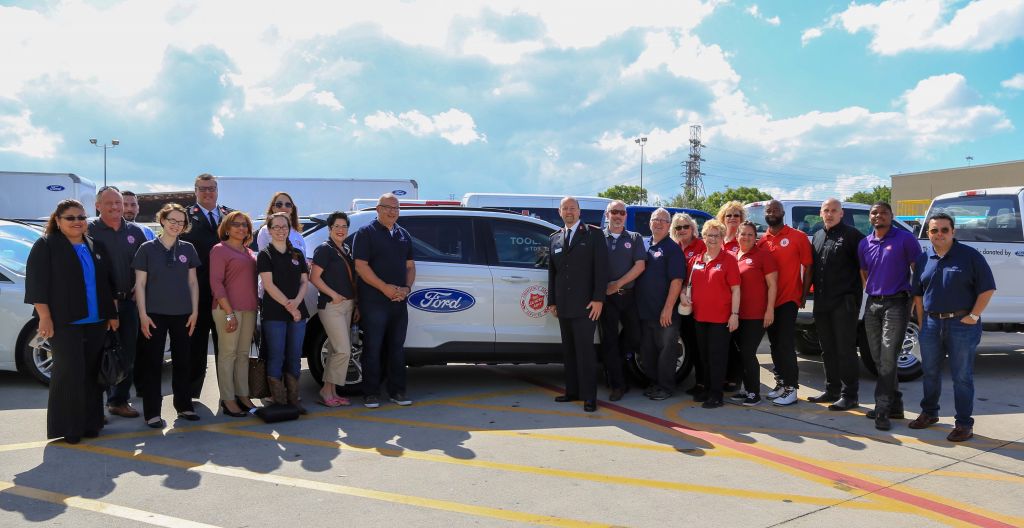 Houston, TX - On Friday, May 11, The Salvation Army, along with seven other local nonprofits, joined Houston-area Ford dealers at the Houston Food Bank for a “Texas is Family” community event to mark Ford’s continued support of ongoing recovery efforts in southeast Texas.  The Ford Fund granted The Salvation Army a total of $500,000, which enabled us to purchase five Ford Edges and four Box Trucks in support of the on-going work of The Salvation Army Emergency Disaster Services in Texas.

The Ford Edges are being used by Salvation Army caseworkers who travel across the state to provide assistance to individuals and families impacted by Hurricane Harvey.

After experiencing the damaging effects of Hurricane Harvey in Port Arthur, TX, the Johnson Family were at wit’s end. They had lost their home, which led them to move into a trailer. “Though we had the dwelling, we didn’t have the essential items,” said Marion Johnson, mother of four. Fortunately, with the help of The Salvation Army and Ford Motors the road to recovery for the Johnson Family will not be as challenging.

Marion connected with The Salvation Army and one of our regional recovery managers who helped provide basic-items for their new home. “When I saw the Ford Edge stop in front of my home I was excited,” said Marion. The vehicle was filled with household items such as linens, dishes, bedding, and much more. “It was jam-packed from top to bottom, and front to back,” she said. The Ford Edge gave The Salvation Army manager the capacity to transport much needed household items straight to her home.

Our regional managers travel across the state to work with local community groups and churches to assist families impacted by Hurricane Harvey. Ford’s donation allows The Salvation Army the flexibility to meet with clients such as Marion.

The Box Trucks are assigned to Salvation Army distribution centers, which receive and deploy donated food and products to affected communities. The Salvation Army responded to Hurricane Harvey with mass care and bulk distribution in 35 Texas Counties, serving over 900,000 meals with 105 canteens (mobile kitchens) in operation during the response phase. The added Ford Box Trucks now give the department the ability to dispense to the 9 distribution centers located in the affected areas of Hurricane Harvey.

Thank you, Ford Fund, for your support of The Salvation Army and our on-going relief and recovery efforts.