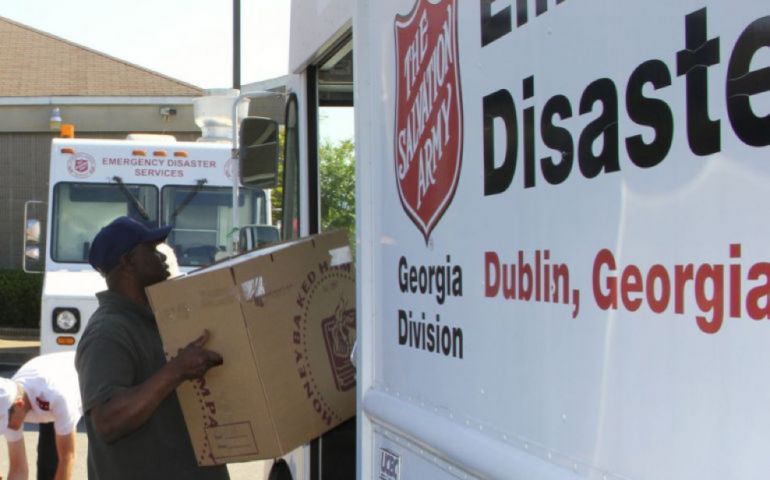 ATLANTA, GA (September 11, 2018) – The Salvation Army of Georgia is mobilized and moving rapidly in anticipation of Hurricane Florence’s impact on the eastern U.S. coast. Four Georgia Salvation Army canteens (mobile kitchen units) from Atlanta, Newnan, Dublin, and Valdosta, Georgia, and their accompanying disaster-trained staff, crew and volunteers are en route toward pre-planned staging centers in North and South Carolina. Additional staff and crew from Elberton and Vidalia, Georgia are part of the Georgia contingent. These units will join forces with other Salvation Army units responding from the Carolinas and other parts of the southeastern U.S. to provide mass feeding, hydration and spiritual care to those impacted by Hurricane Florence.

Hurricane Florence is an intense and powerful storm bringing bad memories along with its promise of fierce winds, tidal surges and rising waters. It is being compared to other storms that ravaged the Carolinas in years past; Hugo, Floyd, Matthew and Hazel. But Florence is different – it has the potential to be more powerful than Hurricane Hazel – the most powerful storm to hit the Carolinas in 1954 with devastating winds of 130 mph.

“We continue to assess and evaluate the situation,” says Lanita Lloyd, Emergency Disaster Director for The Salvation Army of Georgia, “Once we see exactly how the storm impacts the eastern coast, we will be able to deploy and redeploy our resources as needed to help those in the most severely affected areas.”

The Salvation Army of Georgia has a standing fleet of 21 canteens designed for rapid and free-standing response in times of emergency. The remaining Georgia canteens not deployed to the Carolinas are on stand-by ready to serve at potential evacuation centers in Georgia and impacted areas along the eastern U.S. coast. Disaster-trained staff and volunteers also stand ready to serve as needed on canteens or at designated Georgia evacuee shelters for those impacted by Hurricane Florence.

In times of disaster, the best way to help survivors and relief workers is to make a financial contribution. Monetary donations allow disaster responders to immediately meet the specific needs of disaster survivors.