Salvation Army Serving in the Carolinas after Hurricane Florence 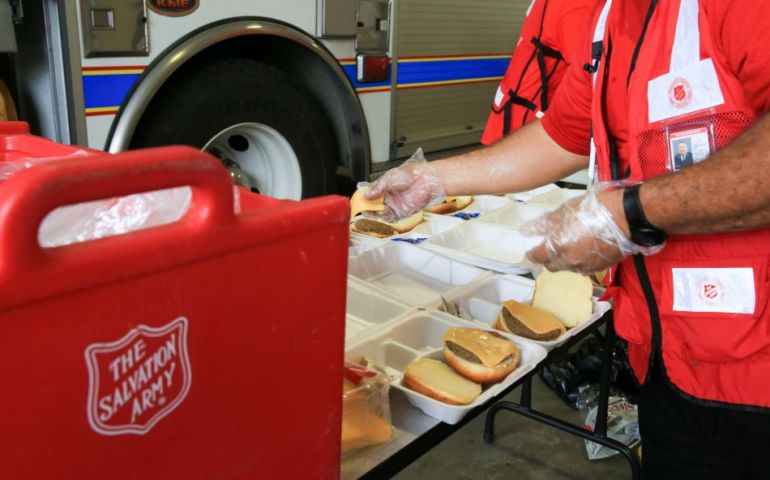 An Army of Salvation Army officers, employees, and volunteers is working to feed, hydrate, and give hope to people impacted by Hurricane Florence

On the ground reports from some of the Salvation Army service areas:

Horry County, SC
The community and Incident Command team are prepping for the disaster after the disaster in the 12,000 sq miles of Horry County. The Little PeeDee River is expected to crest over the next week with 2.5 ft. above record levels with the Waccamaw River following shortly. Anticipate most roads will be cut off and looking at contingency plans of possibly splitting the IC into two groups; north and south. It is anticipated roads in and out of Conway will be cut off due to rising waters.

Canteens continue to serve first responders at Fire Departments and those affected by flooding waters congregating at small community centers. People are aware of the flood waters that are coming, but many are not able to move and are planning to ride out the rising waters.

Currently, there are pockets of service areas, but power is on and businesses are open in most places. In affected communities, many residents are helping each other.

Williamsburg and Georgetown Counties, SC
Georgetown, SC is cut off from both directions because of extensive flooding. Salvation Army teams dropped supplies into Georgetown yesterday and mobile feeding units are in place to serve the community after the roads clear.

Washington, NC
The Washington Salvation Army expects to continue to provide hot meals, cold drinks, snacks, and much-needed spiritual and emotional through Saturday dinner in two locations, the Chocowinity Fire Department and Aurora, NC. In addition, the catering truck is fully stocked with cold beverages and snacks and roams neighborhoods where clean-up crews are working. The team is currently looking to secure cleaning kits for distribution to the communities.

Carteret County, NC
Canteens and crews from Winston-Salem, Raleigh and Newnan, Ga., continue to serve meals and water to communities throughout Carteret County. The focus has turned primarily to the “Down East” communities of Harkers Island, Davis, Atlantic, North River and South River, and others. These areas expect to be without power for a month, if not longer. The shelter at Beaufort Elementary School will close tomorrow morning, while the Newport Middle School shelter continues to serve about 300 displaced individuals. The Salvation Army continues to provide meals and spiritual and emotional care to those residing there on a daily basis.

Wilmington, NC
The power in Wilmington proper is coming on quickly so the majority of people have power. Also several eateries have reopened and are now accessible to the population. Now in the outer counties there is still no power and a lot of standing water. The majority of the people that we are feeding are still w/o power.

Duplin, Lenoir, and Greene Counties, NC
The rivers are still rising and are expected to crest late tonight or early tomorrow morning. We have one mobile feeding unit permanently at one location to feed first responders. We dropped supplies to them yesterday because we knew the roads will be flooded soon. The roads were closing behind us as we left. We are so glad to keep the first responders fed and hydrated so they can help people in the community. The NC Baptist Men are cooking the food for us.  Duplin County is underwater and there are limited routes open. Our board chair was able to get into our location in Duplin County and pack bags of groceries for families – the sheriff and police departments are delivering them to families. Hopefully this food will get households through until the roads are accessible again.

Sampson and Wayne Counties, NC
Operations remain fluid.   Today we will have one crew cooking for the other two who will be roaming.  We will be distributing cases of water and bread to people who come through the Corps today.

**Visit disaster.salvationarmyusa.org for a list of public feeding locations. Locations will be updated daily by 10:30 a.m. daily.**