Tragedy In The Midst of Disaster 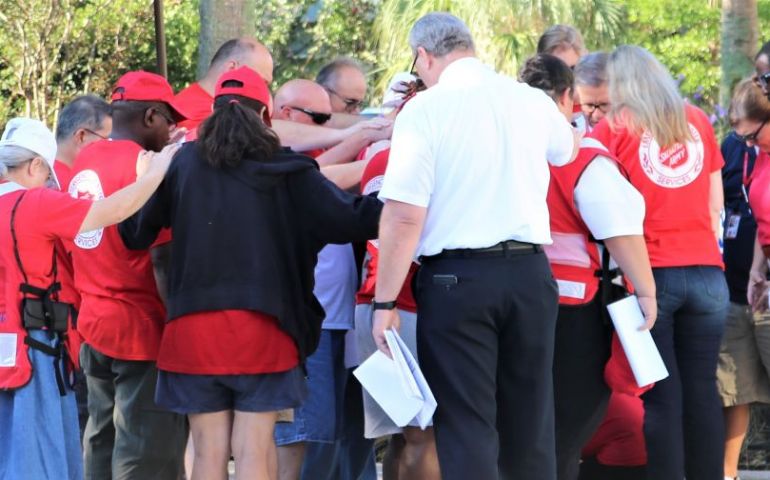 Conway, SC -- Crisis serves to focus your attention – this is true for those in the midst of the crisis and those surrounded by it, responding to it.  During these times, it is easy to forget much of the world continues to move forward.

When waist-deep in crisis – in the case of the flooding after Hurricane Florence this is both figurative and literal – you can become laser focused on a goal.  That focus might be finding your next meal, or in the case of responders, serving that next meal.  There is no comparison to those who lost everything to disaster, but it is fair to say empathy with survivors paired with compassionate service is exhausting.  Empathy and the burning desire to do all that can be done creates its own kind of crisis-based tunnel vision.

That was the case when personal tragedy snapped the tunnel vision of a responder on a Salvation Army canteen (mobile kitchen) serving meals in Horry County.  Focused on getting the canteen loaded with the day’s lunch, Robert – a trained disaster responder from Athens, Georgia mindlessly answered his phone.  “What?!?” he exclaimed into his phone as his eyes snapped into focus searching for Leila, his wife and partner in life, and on the canteen.

As Robert and Leila were focused on their response to disaster survivors, the rest of the world moved on.  The morning’s call, mindlessly answered, now commands its own laser-like focus.  Robert’s “baby sister” passed away moments before the call – an unforeseen shock to the family.  Those who had worked alongside of Robert and Leila saw the physical change and responded immediately.   A community of faith, they turned to God -- not for explanation, but for comfort and strength.

Robert and Leila have no regrets about where they were at the moment, and arrangements were quickly made to get them back home.  Crisis focuses attention…even when the subject of that attention changes.  But, The Salvation Army remains focused on others, serving them without discrimination in Jesus’s name.