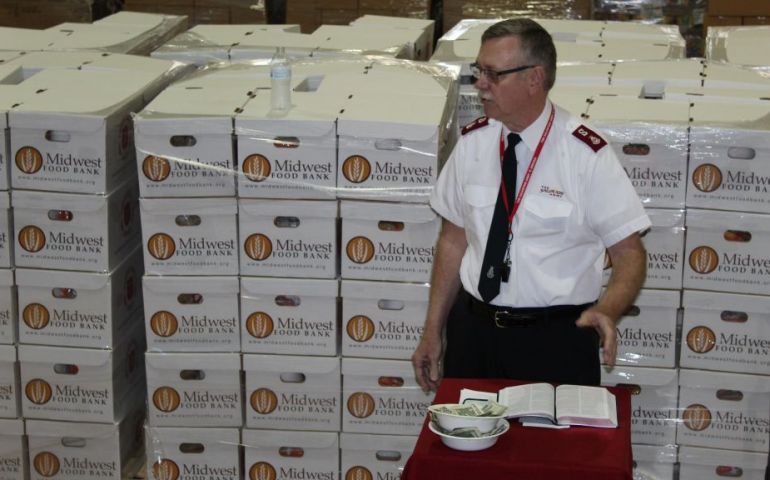 Apalachicola, FL (October 28, 2018) -The Salvation Army is serving those affected by Hurricane Michael in the Florida panhandle. Hundreds of personnel including officers, employees, and volunteers are deployed across multiple counties providing food, hydration, emotional and spiritual care as well as providing much-needed supplies.

On Sunday morning, 38 of those people gathered to worship in Apalachicola before going out to serve those in need. Without chairs, people lined the bottom bleacher or stood in the old gym which has been converted into a community center. The pulpit was made by two boxes with a blanket over them. An offering was taken for Hurricane Michael.

On this Sunday, Captain Jason Perdieu shared these reminders, “Walls will not define us. Wherever we are, we are the church. We are here for such a time as this.” Major David Luft and Major Nelson De La Vergne led the worship service. Major De La Vergne opened the service with an object lesson in an optical illusion. It appeared he tore a piece of paper apart, representing all the messes we as humans make. God takes those many pieces and then burns them with the Holy Spirit to make us complete again. As the story concludes, the piece of paper is whole again.

Major Luft led the group in song with “What a Friend We Have in Jesus” and began his sermon with Mark 4:35-40 (BLB) where Jesus rebuked the wind and sea. He asked the disciples “Why are you so fearful?  How is it that you have no faith?” As everyone in the service is working with people affected by Hurricane Michael, the passages were especially meaningful.

The service was closed by one of the Emotional and Spiritual Care Specialists sharing the words to Casting Crowns’ “I’ll Praise You in the Storm.” The lyrics reminded everyone there The Salvation Army is ministering to Others in His name to those whose hearts are torn, yet still praising Him during the storm in their lives in the aftermath of Hurricane Michael.

Since shortly after the hurricane hit on October 10, one of several Incident Management teams has been based in Apalachicola serving Bay, Calhoun, Franklin, Gulf and Liberty counties. The Salvation Army remains committed to serving those whose lives have been forever changed.