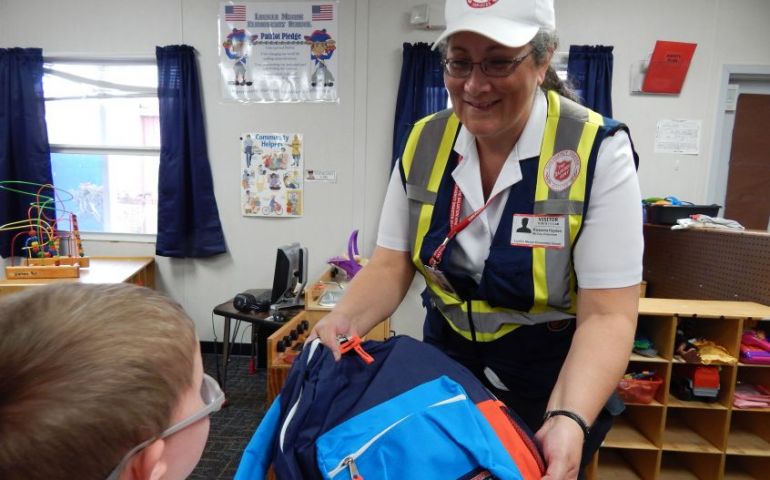 Panama City, FL (November 10, 2018)--Monday, November 5, was the first day of school - again - for many in Panama City, Fla., after Hurricane Michael forced students out for close to a month. But the classroom looks different.

“Some children are living in shelters. Some have moved away. Some are sleeping on couches with friends. Others have lost entire homes,” says Kevin McCoy, a pre-kindergarten teacher.

For a lot of schools, there were 50 percent less students than they had before the hurricane.

In McCoy’s classroom, shelves that were once filled with backpacks, school supplies and personal items now sit empty. “Many of these children have been left with nothing,” says McCoy. “It’s gut-wrenching.”

To help his students move forward, McCoy contacted The Salvation Army for help with backpacks and school supplies.

“Giving a backpack to a child who has been through trauma such as this is more than about pencils and crayons,” says McCoy.  “It’s about stability, restoration, and says that someone cares.”

A survivor himself, McCoy says it’s great to be back in the classroom.

“Thinking about the children helped me get through the storm,” says McCoy. “I needed to see them and to know there were OK.”

McCoy says he is still working through his own painful memories.

“The eye of the storm came over my house,” says McCoy. “My roof caved in and there is water damage. I’ve lost 60 percent of my possessions and am still cleaning out debris. It was scary and unlike anything I’ve ever seen.”

While McCoy works through his own rebuilding, he wants to ensure he gives hope to his students for the future.

“The Salvation Army has met our classroom needs, which is absolutely wonderful,” says McCoy. “Everyone, including the children, has been traumatized. The backpacks give us all something to smile about.”