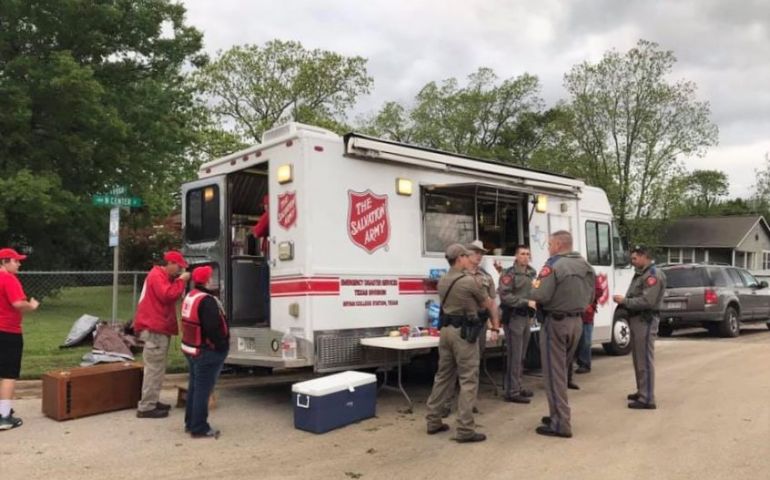 An emergency triage center was established by the city at the United Methodist Church, where The Salvation Army team began feeding. It is reported that many homes have been damaged, and some destroyed by the powerful storm that affected several other communities in the area. Operation Barbecue Relief, a valued partner of The Salvation Army in times of disaster, provided 200 meals to be served and is planning to move a kitchen into the area on Sunday. The Salvation Army and Operation Barbecue Relief personnel are working together to coordinate feeding operations.

The mobile kitchen from Williamson County-Austin, with the ability to serve up to 1,500 meals per day, was deployed to Alto, another small community affected by the storms. They expected to provide close to 500 meals and drinks on Saturday to first responders and storm survivors, in addition to emotional and spiritual care.

“The Salvation Army is prepared to support our communities in times of need and today the Bryan team was mobilized within minutes of the tornado touchdown in Franklin,” said Alvin Migues, Emergency Disaster Services Director in Texas. “The storms continue to affect additional communities and we have several units on standby to assist. We continue to pray for all who are affected by these storms as they move east into the South.”

Additional EDS teams from San Antonio and Waco are standing by for additional deployments if requested.