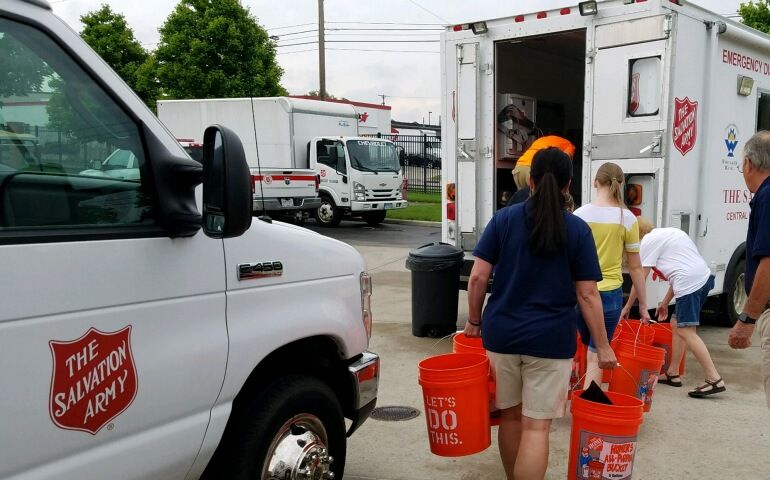 CINCINNATI, OH (May 30, 2019)– The Salvation Army of Cincinnati and Northern Kentucky continues to assist communities hit by a series of powerful tornadoes that struck Dayton, Ohio late Monday evening. The Salvation Army has been on the ground supporting and supplying aid since early Tuesday morning. Canteens (mobile relief units) from Dayton, Columbus, Cincinnati, and Lexington have been providing residents with meals, emotional and spiritual care, hydration, and snacks.

One of the great challenges is the number of roads closed by downed power lines and other debris, which block access to impacted areas. Using a Salvation Army Polaris UTV, many neighborhoods have begun to see relief through food and water delivery.

"The relief efforts have proved to be particularly challenging, as much of the storm hit an urban area of the city," explained Major Klenk of The Salvation Army. "We have been working tirelessly to get our vehicles into areas where trees and power lines have been destroyed, to better aid and assist those who have been directly affected."

To date, The Salvation Army has served nearly 3,000 meals, 10,000 drinks, and 4,000 snacks to those impacted by the storms. The Dayton Kroc Center is currently being utilized as the central feeding hub for response efforts. The Kroc Center, in cooperation with local emergency management, is ramping up as a distribution site, mainly for bottled water and other necessities. Many of those areas hit by the severe weather are poverty stricken and will require long-term help.

“With some water and power being restored to area neighborhoods, people think life is back to normal. For many in our community, restoration and recovery is a long process just beginning,” stated Major Gayle Senak, Dayton Kroc Center Administrator.

Additionally, teams of trained Salvation Army emotional and spiritual care personnel have been deployed to help with the multitude of emotional or spiritual issues survivors may experience.

At this time, additional resources are not being requested, but extra canteens are on standby should they become necessary over the coming days.