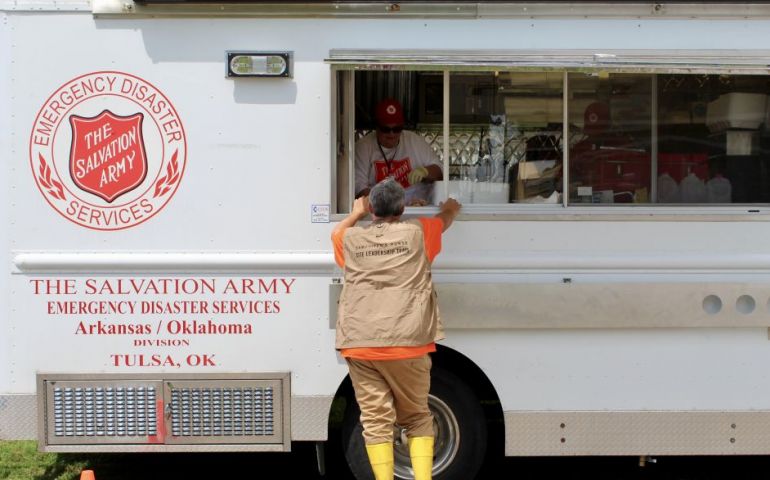 An Army of Salvation Army officers, employees and volunteers are providing food, hydration, emotional and spiritual care to people impacted by tornadoes and flooding.

Tulsa, OK - Across Arkansas and Oklahoma, hundreds of people are either evacuating, were evacuated, or are slowly being allowed to return to their homes.  The Salvation Army is serving survivors and first responders as the impact from the Arkansas River continues to unfold as it flows from Oklahoma into Arkansas.  Record-breaking crests are expected.  A flood of this magnitude has never happened before in Arkansas.

After days of rain, the sun was shining on Friday and Saturday providing a welcome break to all affected.  The Salvation Army has served 2,579 meals, 3,640 drinks, and 1,085 snacks as well as providing emotional and spiritual care to 176 individuals.

“It has been great to see the resiliency of the people we are meeting and it’s an honor to see the people of Green County come together.  It is a blessing to be a small part of the equation as those impacted begin the process of rebuilding, “says Captain Bradley Hargis, Hot Springs Commanding Officer and Planning Chief on the Incident Management Team.

Avant:  A small community northwest of Tulsa, affected by the flooding and backflow of the river, received support this week in the form of snacks, lunch, and dinner.

El Reno:  After a tornado struck and destroyed multiple mobile homes, The Salvation Army was on site the morning after to serve first responders and again later in the week when individuals/families were allowed back on the site to search for their belongings.

Hominy:  Meals were provided to several seniors who were left without power after flooding caused the neighborhood to be without power.

Miami:   The Miami Salvation Army Service Extension Center provided meals to those impacted by the storms.  Supplies in the form of clean-up kits, water, and additional gloves.

Sapulpa:  After an EF1 tornado struck Sapulpa, a mobile feeding unit roamed the neighborhood with hydration and clean-up kits.   Meals were served to those impacted by the tornado at the Boys & Girls Club at the Creek County Service Center.

Sand Springs:  As neighborhoods began to open as waters receded, The Salvation Army provided a mobile feeding unit as well as a fixed feeding site for survivors, first responders, and volunteers.

Tulsa:   The Center of Hope housed additional guests as they were evacuated from their living quarters.  Additionally, meals were provided to support the Red Cross shelter in East Tulsa.

West Tulsa:  Food, hydration, emotional and spiritual care were provided to a housing complex where the residents were without power for over a week and evacuated to other locations until the waters recede.

Fort Smith:  As the waters rose, evacuations and sandbagging began, the local Salvation Army office provided food, hydration, emotional and spiritual care for those packing their belongings to leave for higher ground as well as those who were sandbagging to try to alleviate water going into their homes.

The best way to help after a disaster is to make a financial donation to the charity of your choice.