Walmart Donates $250,000 to The Salvation Army for Hurricane Dorian Response 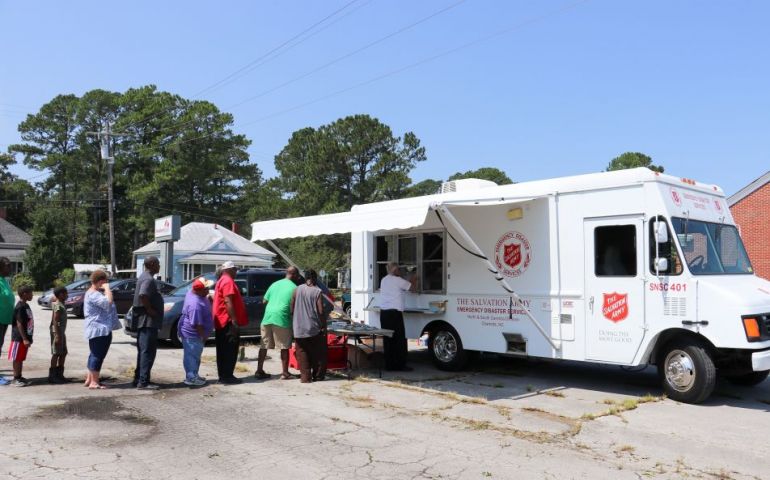 ALEXANDRIA, Va. (Sept. 14, 2019) – In early September, Hurricane Dorian made catastrophic landfall in the Bahamas before churning up the Atlantic coast of Florida, Georgia and the Carolinas. As response organizations continue aiding affected communities, Walmart provided critical support with a $250,000 donation to The Salvation Army as part of a total $500,000 cash and in-kind gift for relief and recovery on September 10.

“Our customers and associates along the East Coast have experienced the impacts of this storm, and our hearts go out to the people of the Bahamas and the devastation they are facing there,” Qadira Harris, senior manager at Walmart, said. “In times like these, the efforts of our local stores and distribution centers, as well as support organizations like The Salvation Army, first responders, local officials and government organizations to meet the needs of the affected communities have never been more important. We are grateful to all those providing relief and we want to do our part to help.”

“The Salvation Army will be greatly empowered to help families caught in the midst of disaster because of Walmart’s generous support,” said Lt. Colonel Ward Matthews, national spokesperson for The Salvation Army. “Of course, this is one many ways Walmart helps us achieve our goal of serving more than 23-million people each year.”

In addition to various annual partnerships like the Red Kettle Campaign, Walmart has donated more than $5.5 million to The Salvation Army for disaster response since 2017.

The Salvation Army was serving in the Bahamas and United States before the storm, during it, and will continue long after.

Response efforts in the Bahamas include two (2) shelters and distribution of hygiene kits and food boxes in Freeport, supporting of 12 shelters in Nassau with food, hydration and hygiene kits. The Salvation Army thrift stores in the Bahamas are helping survivors by distributing clothing and household items free of charge.

The Salvation Army is sending additional personnel to the Bahamas to aid teams that have been serving since before the storm’s landfall. The Salvation Army in the Bahamas anticipates need for long-term, life-sustaining relief and recovery, including shelter, food, water, clothing, hygiene supplies and emotional and spiritual care.

In the North Carolina Outer Banks, The Salvation Army is working with government and NGO partners to provide food, drinks, and emotional and spiritual care to survivors and first responders who are cleaning up after historic storm surge and widespread power outages.

The Salvation Army provided services in Florida and Georgia to support shelter and emergency operation centers while Hurricane Dorian caused evacuations across the Atlantic Coast for a period of uncertainty before the storm took its northern turn. During that time, more than 75 mobile kitchens stood ready to help affected communities across the southeastern United States.

As The Salvation Army continues providing life-sustaining support to survivors and first responders, the public is encouraged to help by giving monetary support.