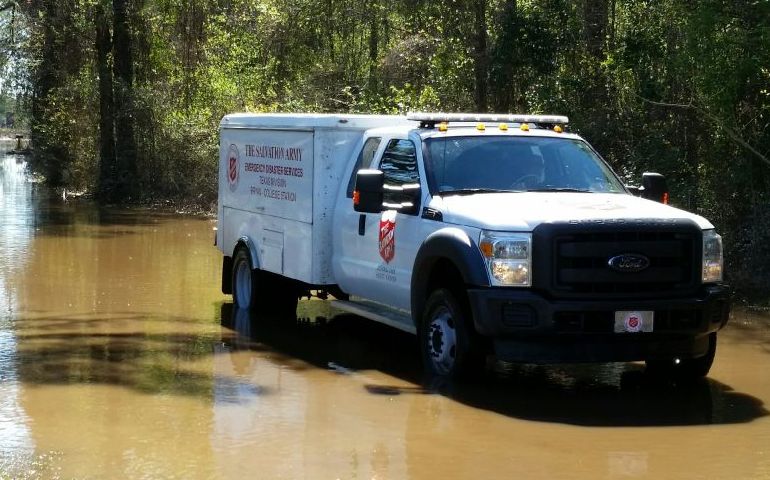 Dallas, Texas (September 19, 2019) – The Salvation Army Emergency Disaster (EDS) teams in Southeast Texas are preparing to respond to heavy rain and flooding associated with Tropical Storm Imelda. Some areas have experienced as much as 30 inches of rain in the space of 24 hours and significant flooding has been reported throughout the region.

“We have six mobile feeding units prepared to respond in Southeast Texas with more units on standby,” said Kathy Clark, Associate Emergency Services Director for The Salvation Army in Texas. “We also have a Salvation Army field kitchen that has been supporting the work of volunteers in Orange, Texas for the last few months that is available with the capacity to produce up to 5,000 meals per day. We will be watching this developing situation very closely over the next 24 to 36 hours.”

On Thursday morning, The Salvation Army in Orange received a request to provide snacks and hydration at an Emergency Shelter set up at the North Orange Baptist Church where 62 individuals spent the night on Wednesday. In Galveston County, The Salvation Army shelter is open for anyone needing shelter from the storm and widespread flooding. “We had around 30 additional people stay in the shelter last night,” said Holly McDonald, Community Relations/Development Manager for The Salvation Army in Galveston County. “We will continue have an open door for anyone needing a dry, safe place to stay, including those who may need to evacuate their homes in neighboring communities.”

Many roads across Southeast Texas remain flooded at this time as rain continues to fall in the area. “We will continue to monitor the situation and will know better how and where we can provide service in the coming few days,” said Clark. “The Salvation Army will be ready to mobilize our trained emergency disaster services teams to meet both the practical and emotional needs of those affected by Tropical Storm Imelda.”

Financial donations can be made at helpsalvationarmy.org or by calling 1-800-SAL-ARMY to support response efforts in Southeast Texas.