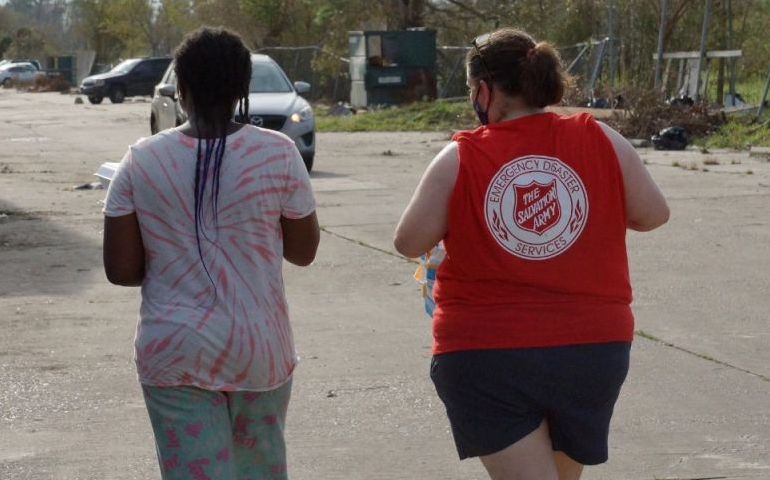 Lake Charles, LA (August 31, 2020) - Linda Drounette remembers vividly the fear of riding out Hurricane Laura in her apartment. “I just sat there listening to the wind whistling, trees falling, so many things crashing.” When it was over, Linda and her neighbors were left with no resources. The manager of the complex had left before the storm and has not returned. With no cell service and no options for charging cell phones, there was no way to call for help.

Linda cried when relaying her experience. “We are just so happy to see The Salvation Army here. We were so scared, and we don’t know what to do.” Linda’s daughter, Jayla August, and her granddaughter, Lachaunte August, have been checking in to make sure Linda is ok.

Jayla has become the de facto leader of this group of residents, banding together to survive. She has a car that is too damaged to drive, but it will still crank. She has been sharing with her neighbors to give them a place to charge phones and other necessary devices.

Despite a large Haitian population that does not speak English and several deaf families with limited abilities to communicate, the neighbors have become a family of sorts. As the canteens pulled in, residents were quick to tell Salvation Army staff where other neighbors who could not walk far lived and where quick to take only what they needed to ensure there was enough for others.

“Much of the property is unlivable,” said Jayla. “We have all moved in with each other and combined as much as possible.” The residents grilled all of the food out of their kitchens the first few days and shared the little they had to make enough for everyone. “We have been finding most of what we need,” Jayla continued, “But food is getting impossible to find now. Stores aren’t open even for those who have money. Having hot meals brought to us was such a blessing.”