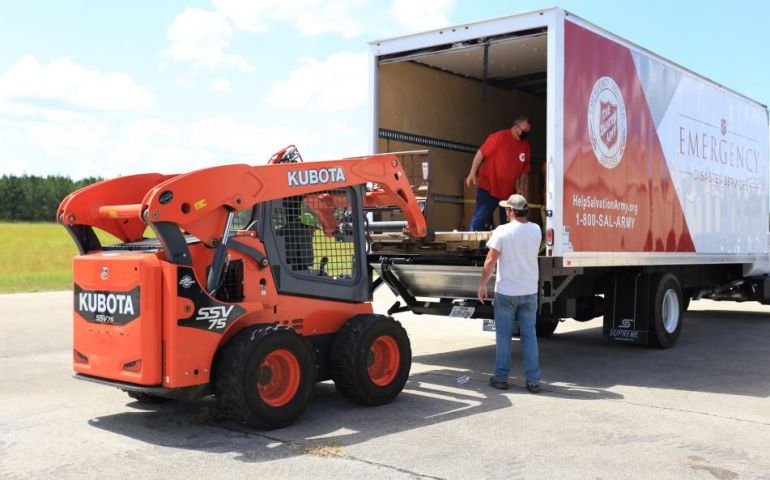 Dallas, Texas (September 3, 2020) – After Hurricane Laura hit the Southeast Texas and Louisiana coastline on Thursday, August 27, much of the focus has been on communities including Orange, Port Arthur, Vidor and Lake Charles, LA. However, the storm retained hurricane intensity as it moved north with dramatic effects being felt in East Texas. During the last week, The Salvation Army has provided practical assistance in these rural counties, leveraging year-round contacts and relationships to deliver help to those in need.

The Salvation Army Service Extension program is one of the most unique and effective programs within the organization. Almost 250 Service Units are found in Texas. This is a location where The Salvation Army does not own a building or have any paid staff, but rather social service assistance is administered by volunteers who may work in a bank, in the courthouse, at the police department, or other similar businesses. These volunteers provide faithful year-round support to The Salvation Army and in recent years have played an integral role in several large-scale disaster response efforts.

The Newton Service Unit is a great example of how a volunteer-run unit can have a significant impact on the local community. Joe Miller has been the Chairman of the unit for more than 10 years. “At one point, The Salvation Army was operated by the County Judge, but they were looking to restructure and needed someone else to take it on. I don’t remember how or why, but that’s when I became the Chairman,” said Miller. “Being a Wesleyan, I’ve always had a great affinity for The Salvation Army as we have a very similar theology. I love the fact that The Salvation Army is first and foremost a church. There’s nothing wrong with other 501c3 organizations who also do a lot of good, but there’s something different about the Army being a church. All that they do is motivated by their love for God and people.”

Residents of Newton County have been significantly affected by Hurricane Laura despite being more than 30 miles inland. “Many people have lost trees on their properties and a significant number of homes have been damaged. Large areas have been without power or running water since the storm,” said Miller. “The Salvation Army sent a mobile kitchen from Beaumont to serve hot meals and has also supplied tarps for roof repairs and clean-up kits,” said Miller. “As utilities come back on, people want to fix their own food again, but it’s difficult and expensive for them to restock their refrigerators and freezers. The Salvation Army and the Southeast Texas Food Bank are going to be helping residents get back on their feet.”’

Service Unit volunteers throughout Texas have responded to the call for help during times of disaster and many have completed Salvation Army training courses. “One of the things I love about The Salvation Army is their unwavering support. No matter what happens in our community, I know that I’m going to hear from The Salvation Army asking how they can help. I know when they tell me they’re going to do something, it gets done. That’s my kind of ministry!”

Since Friday, The Salvation Army has served 69,862 meals, 50,101 drinks, 25,731 snacks in affected communities. Trained staff and Emotional and Spiritual Care volunteers have prayed with 730 storm survivors.

The Salvation Army is serving food in the following fixed locations on Thursday: