SALVATION ARMY RELIEF EFFORTS BEGIN IN THE PANHANDLE IN THE WAKE OF HURRICANE SALLY. 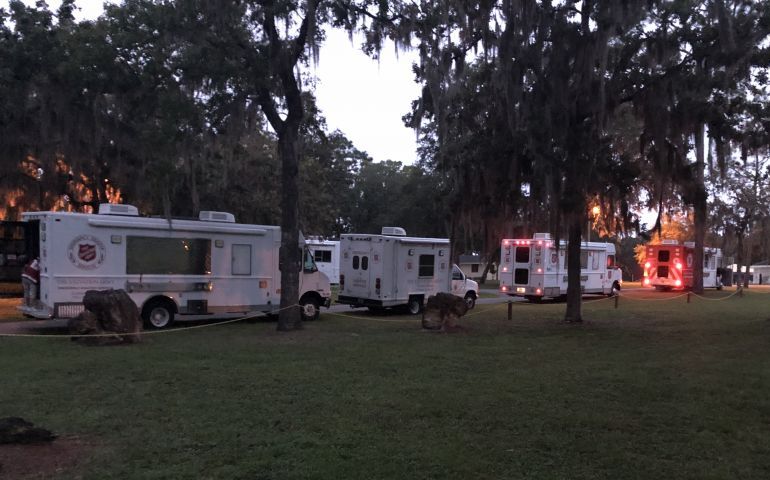 Lutz, FL (September 17, 2020) - As the sun rose Thursday morning the sounds of chainsaws filled the air and the work towards recovery had begun as the impact from Hurricane Sally was apparent as record levels of rain had fallen across the Panhandle leaving thousands without power, streets flooded and impassable and homes and businesses ruined from the water damage.

Captain Herb Frazier III. Pensacola corps officer,  reports that many of the roadways have trees down blocking movement including around the corps building which is preventing them from accessing their property and the canteen that is located there. Power remains down at the corps as well with no timeline as of yet on when it might be restored.

With power in question the possibility of moving the Incident Command Center to an alternative site is being considered.

Our partners,  the Florida Baptists,  are setting up their large feeding kitchen at the Hillscrest Baptist Church located at 800 E 9 Mile Road in Pensacola to provide hot meals and is planning to begin preparing 5,000 meals on Friday for delivery by Salvation Army mobile feeding units.

The nine canteens that were staged at Camp Keystone over night are now making their way across the Panhandle enroute to Pensacola, but major transportation routes including Interstate I-10 northeast  of Pensacola is closed at Crestview  which could mean finding alternative routes in to the affected area and delaying their arrival.

In Ft. Walton Beach, Lt. James Milner, corps officer,  reports that conditions seem to be more favorable as power is being restored across the area and that many of his employees were able to get into work this morning.

Major Ed Binnix the corps officer in Panama City indicated that flood waters had not receded but was able to dispatch two teams to provide 500 meals in two apartment complexes near-by that were just recently renovated from Hurricane Michael and once again have been damaged and flooded out.

For the latest information on The Salvation Army’s response to Hurricane Sally, visit:

The help The Salvation Army serve those who are impacted by Hurricane Sally you can visit:

www.HelpSalvationArmy.org to make a donation.