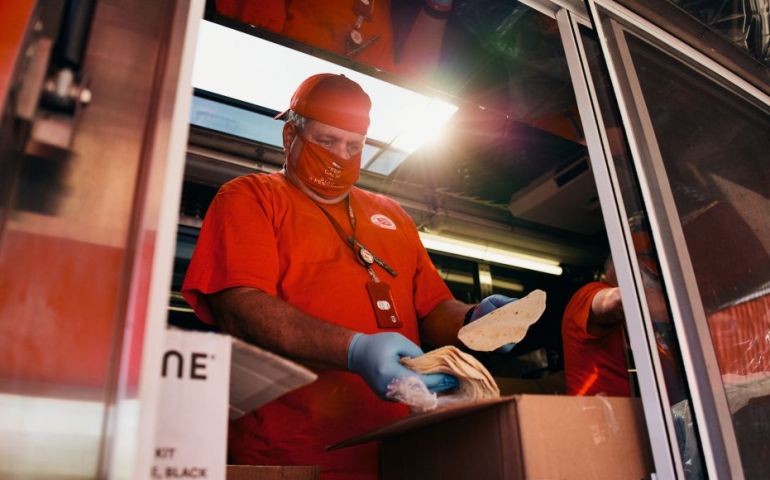 Dallas, Texas (October 28, 2020) – After several months of consecutive disaster response efforts, The Salvation Army Emergency Disaster Services (EDS) teams from Texas have finally returned home. 2020 has been a difficult year for so many people and communities due to the ongoing COVID-19 pandemic. For many, these challenges were exasperated by a particularly active hurricane season that significantly impacted communities along the Texas and Louisiana Gulf Coast, requiring large-scale response efforts and the implementation of significant safety and operational protocols from The Salvation Army and its partners.

“This has been a very unique hurricane season, dealing with the demands of a global pandemic along with several powerful storms that have impacted Texas and our neighbors to the east,” said Alvin Migues, Director of The Salvation Army EDS in Texas. “Any large-scale response effort, deploying multiple response units from around Texas, dozens of staff and volunteers, and coordinating the delivery of practical assistance is always challenging. Add to that increased cleaning and safety protocols being implemented each day, and you can imagine how tough the past few months have been.”

Many registered and reliable Salvation Army EDS volunteers are older in age, a demographic particularly susceptible to the COVID-19 virus. “We’ve had to work hard and be creative in terms of our staff and volunteer deployments during Hurricane Delta and Laura, without several of our regular and experienced team members,” said Migues. “The team and the crews that I served alongside in Lake Charles were some of the finest individuals that I have had the pleasure to work with. Even with the daunting challenge of potential COVID-19 exposures, our team stood firm in their commitment to serve. I witnessed some of the most inspiring actions to support one another and to continue to focus undistracted on the mission at hand. I was encouraged to see that The Salvation Army is the Army of God prepared to stay the course.”

The response units under the leadership of The Salvation Army Texas EDS team delivered 64,239 meals, 32,328 drinks, 19,482 snacks, and 2,223 food boxes to residents of the Lake Charles area after Hurricane Delta. In support of the clean-up operations, 1,750 hygiene kits and 1,138 tarps were also distributed. EDS staff and volunteers prayed with 2,640 individuals; an integral part of any Salvation Army disaster response effort.

Linda Dowell, who deployed to Beaumont, serving in Lake Charles after Hurricane Laura, turned around only a couple of weeks later to deploy again after Hurricane Delta. “It will take years for this area to recover. Story after story of people living in severely damaged homes because they have nowhere to go,” said Dowell from her home in Granbury, Texas. “The need is so great. Continue to pray for this community.”

Professional photographer, Robby Klein from Nashville, spent a day with The Salvation Army EDS teams in Lake Charles. “The Salvation Army set-up in Lake Charles was very impressive. Everything was very focused on their operation and feeding people,” said Klein. “There were a number of older volunteers out there and I watched one lady hauling a case of water almost as big as her that first morning. It was inspiring,”

Klein, who grew up in Southern Louisiana, witnessed first-hand the work of The Salvation Army when his family home was in the path of Hurricane Katrina in 2005. “The mobile kitchens and staff received a great reception from those who came for help in Lake Charles. I remember from personal experience during Hurricane Katrina after weeks of surviving on MRE’s what a difference a hot meal made. I spoke to one lady who had been working all hours to repair and clean up her house. The littlest thing – not having to worry about what she would have for dinner that night – meant a great deal to her.”

“The Salvation Army teams were really cranking it out!” said Klein. “The scale and efficiency of the operation was impressive. I enjoyed being able to connect with The Salvation Army and the work they are doing is making a real impact for those affected by the storm.”

Even as the Texas EDS team and volunteers recoup and recover at home in Texas, Tropical Storm Zeta looms in the Gulf, once again forecast to become a hurricane, making landfall along the Louisiana coast.

For the latest information on The Salvation Army response efforts go to www.disaster.salvationarmy.org. To make a donation to support ongoing hurricane relief efforts please visit www.HelpSalvationArmy.org.