Your Work Does Not Go Unnoticed: Tornado Relief Continues in Newnan GA 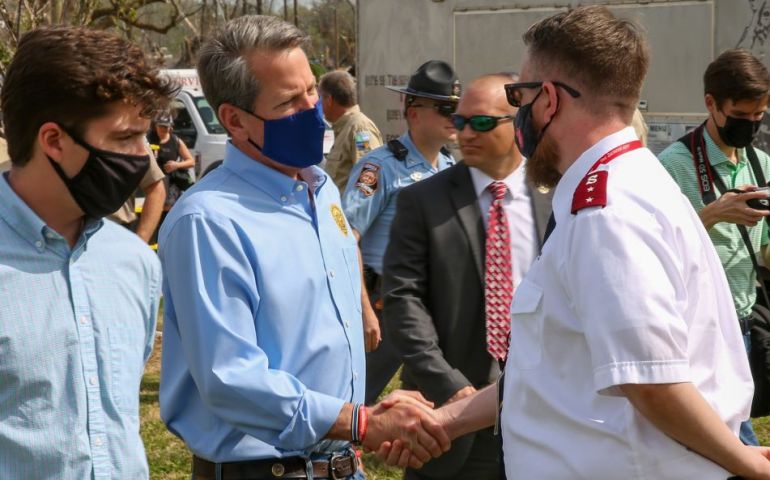 NEWNAN, GA (March 27, 2021) – The Salvation Army of Georgia deployed an Incident Command team to Newnan, Georgia to help those communities in the surrounding area impacted by severe storms and the raging destruction from an EF-4 tornado.

Saturday, Georgia Governor Brian Kemp visited the communities in and around Newman and addressed the public from the lawn of the severely damaged Newnan High School. Toppled trees, damages roofs, debris, insulation-strewn branches, and trees stripped of their leaves and branches served as a backdrop. After his public address, Governor Kemp and First Lady Marty Kemp took a few minutes to speak with Captain Jason Smith, The Salvation Army of Georgia’s Incident Commander in Newnan. They shared with Captain Smith their appreciation of The Salvation Army for their many years of service to the people of Georgia, and specifically for helping the people of Newnan now in their time of need.

“Thank you for being here for these people who need your help – we truly appreciate the Salvation Army,” said Governor Kemp. “Your work does not go unnoticed.”

The two Salvation Army RRUs serving the Newnan communities quickly moved to target the most impacted areas. Wherever the RRUs went, word spread quickly that The Salvation Army was there. People soon started coming to the RRU locations, where they found food, drinks, cleaning kits and storage bins. One of the favored items was the Voss bottled water donated by Dwayne “The Rock” Johnson.

“I’ve been deployed in many disaster situations,” said Captain Smith in an interview with The Weather Channel later Saturday afternoon, “but I’ve never seen destruction like this.”

“We are called to bring Hope to people,” Captain Smith added, “and this what we are doing here in Newnan.”

The severe weather that hit Georgia was not confined to the Newnan area. Further north in the Peach State around the area of Cedartown, Georgia, including Bartow and Floyd counties, Lieutenants Tim and Paula Blevins, The Salvation Army officers from Rome, Georgia, distributed cleanup kits and plastic storage boxes to those impacted by severe weather there. The storm damage in north Georgia is associated with the same weather front that stuck Newnan.