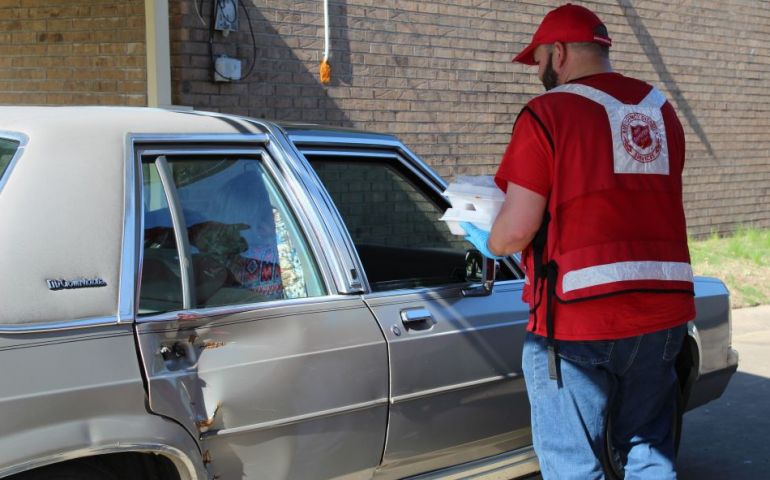 May 7, 2021 – Fort Smith, AR – The Salvation Army of Fort Smith responded to multiple communities affected by EF-1 tornadoes that impacted portions of Crawford and Sebastian Counties in Arkansas.  Damage to trees left many neighborhoods impassible with downed branches, and many homes were damaged severely as a result of tree limbs falling into the structures;

On Tuesday, the Fort Smith mobile feeding unit (canteen) began service with the assistance of additional resources from Central Oklahoma Area Command in Oklahoma City and Muskogee, Oklahoma.   Both locations were able to deploy their rapid response units (RRU mobile feeding units) to assist with feeding, hydration, and emotional and spiritual care.   As of Thursday, food service concluded with over 1,250 meals, 1,129 drinks, and 1,251 snacks provided.  Additionally, several clean-up kits and food boxes were provided.

Communities served included Alma, Van Buren, and Mulberry, Arkansas.  The Salvation Army worked closely with the Mayors of these cities during the storm response.  Mayor Gary Baxter, City of Mulberry, states, “The Salvation Army donated food, snacks, and drinks after disaster-affected several homes.  Power was out for almost a week.  Many lost food items.  Not only did The Salvation Army came in and provided meals to help those individuals, but they also provided cleaning supplies and food boxes.”   Mayor Baxter goes on to say, “In addition to the services provided, the representatives from The Salvation Army were very professional, courteous and caring. The City of Mulberry is deeply grateful for the assistance provided to our residents.”

The best way to help those affected by disasters is to make a financial contribution that allows disaster responders to immediately meet the specific needs of those impacted. Financial donations may be made at www.helpsalvationarmy.org or by calling 1-800-SAL-ARMY to support response efforts.  For the latest Salvation Army disaster information, please go to disaster.salvationarmyusa.org and watch for regular updates at www.facebook.com/SalArmyFortSmith for additional information.