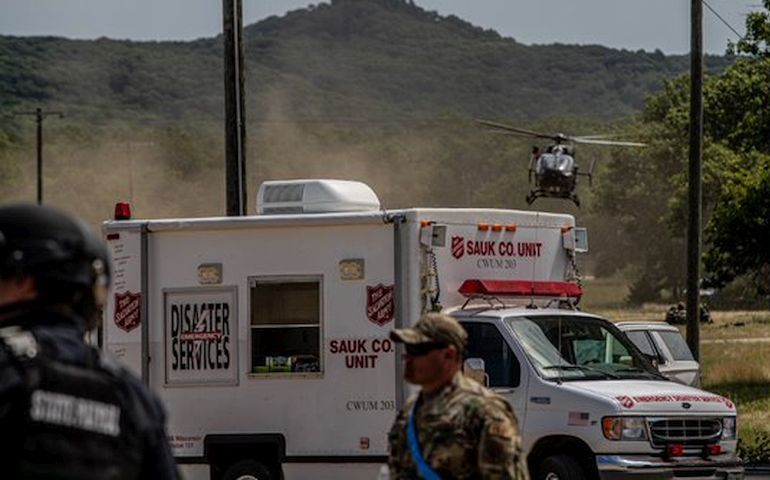 Recently, members of The Salvation Army Central Territory Emergency Disaster Services (EDS) team provided support to the National Guard Patriot Exercise ’21 at the Emergency Operations Center at Volk Field and at the Combat Readiness Training Center North Fort McCoy in Wisconsin. This exercise was designed to prepare civilian emergency management and first responders to work collaboratively with U.S. military entities during a variety of disasters and recovery operations.

The Central Territory team participated in several specific scenarios. The first was based on an earthquake taking place in Wisconsin. It required creating a directed net with Salvation Army Team Emergency Radio Network (SATERN) volunteers. Amateur radio operators from three states demonstrated they could maintain a clear, on-air gathering to disseminate disaster-related communication and share public information messages. Their work will be vital if cell towers are not working. They are responsible for coordinating Salvation Army resources, sharing instructions and maintaining contact with other locations as needed.

“Our SATERN team has been involved in the Patriot North exercise for many years and did an excellent job. We asked them to do a little more than usual this time due to COVID-19. We had to cut back on the amount of people who could participate, so we decided to cross-train the SATERN volunteers, and they filled in for all of the roles needed in the tactical operations,” said Benny Benedict, Territorial Disaster Resource Coordinator. “They embraced the opportunity, and now we have a little more depth on the EDS bench.”

It was during the earthquake scenario that The Salvation Army, through collaboration with HOPE Animal-Assisted Crisis Response, also had the opportunity to do some training in the areas of emotional and spiritual care (ESC). Military personnel brought “distressed victims” to a mobile kitchen where they received comfort and support while visiting with calm, well-mannered dogs. This was a unique opportunity to practice providing stress relief to a variety of people.

In the second exercise, a Salvation Army mobile kitchen was set up in a simulated city to test military security capacities. The area was designated as a Point of Distribution (POD) where food, water and other supplies were located. Then it was “overrun” by community members desperate for supplies. Military personnel worked to secure the location, establish order and administer the supplies in an equitable manner.

According to Bert Williams, Metro EDS Coordinator and Training Coordinator, Salvation Army Indiana Division, it was important to stay focused on his job and helping others. “When our canteen was overrun and there were people around, inside and near the truck, it felt overwhelming. I had to remind myself there are no good guys or bad guys; there are only people. The military would make that distinction. My only goal was to get resources to people in need.”

The Salvation Army is often asked to provide support for the military and law enforcement agencies during a civil demonstration. For the next exercise, two Salvation Army mobile kitchens were used as the site of a protest. All available volunteers were asked to walk the line and distribute bottled water to both the people demonstrating, and those who were peacekeeping. This was a unique opportunity to experience what it takes to maintain peace and security in a potentially volatile situation.

The Salvation Army provided meals, snacks and hydration for attendees throughout the day.