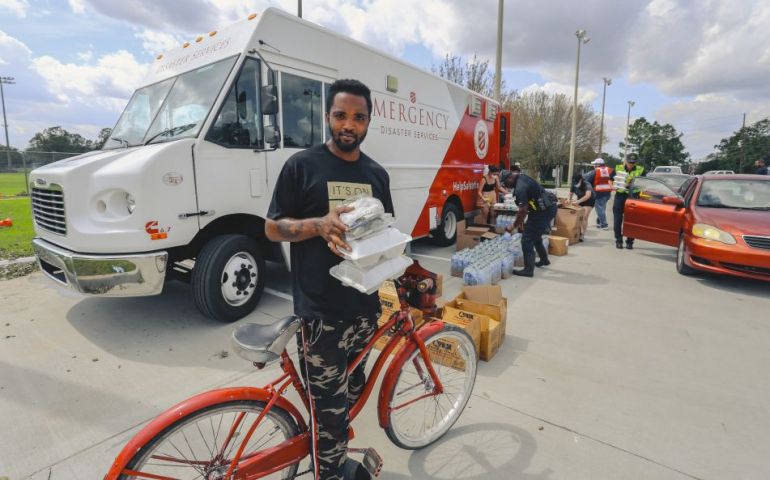 The Incident Command Post in Gonzales, LA, was fully functional early on Tuesday morning, and the ongoing collaboration with the Southern Baptist Convention Texas Field Kitchen saw food being prepared and loaded onto waiting Salvation Army mobile units by mid-morning. Units each received their assignments, driving for the first time into communities in the southern region of the state with several traveling more than an hour to specified locations.

“The first day of disaster operations is always something of a challenge,” said Alvin Migues, Emergency Disaster Services Director for The Salvation Army in Texas. “There are so many moving parts to an operation of this scale and there remains a number of significant unknowns. We have crews driving on roads that may be flooded in places, blocked with trees and down power lines, and pulling into communities for the first time. As well as service delivery we continue on something of a fact-finding mission. I am so proud of our Salvation Army staff and volunteers who have worked around the clock to get this command post operational and are already delivering practical assistance to those in need.”

Close to 9,000 meals were served on Tuesday, in more than 10 cities. In several locations, the arrival of The Salvation Army mobile units was met with long lines of traffic with residents eager to receive their first hot meal since Hurricane Ida moved through Louisiana, leaving so many without power. “God bless you for being here and helping us,” said a grateful resident of Hammond, LA, who had patiently waited in the drive through line to receive 5 meals for their family. “We heard The Salvation Army would be coming today and you all are a real blessing. Thank you!”

Seven additional units arrived at the Incident Command Post from the Oklahoma Arkansas Division on Tuesday evening and will further expand the reach and capacity of assistance in the coming days. Salvation Army operations are also in place in other impacted areas of the state including New Orleans and the Gulfport region.

“We anticipate ramping up service to close to 20,000 meals a day. Our team continues to assess the specific needs of communities impacted by Hurricane Ida,” said Migues. “We’re off to a tremendous start and our staff and dedicated volunteers are focused and prepared to deliver meals, water, and a word of encouragement and a prayer to those we encounter.”

To make a financial donation to support ongoing Hurricane Ida relief efforts go to helpsalvationarmy.org or call 1-800-SAL-ARMY. For the latest disaster response information go to www.disaster.salvationarmyusa.org and watch for regular updates on our social media pages at www.facebook.com/salvationarmytexas/ and www.twitter.com/salarmytx