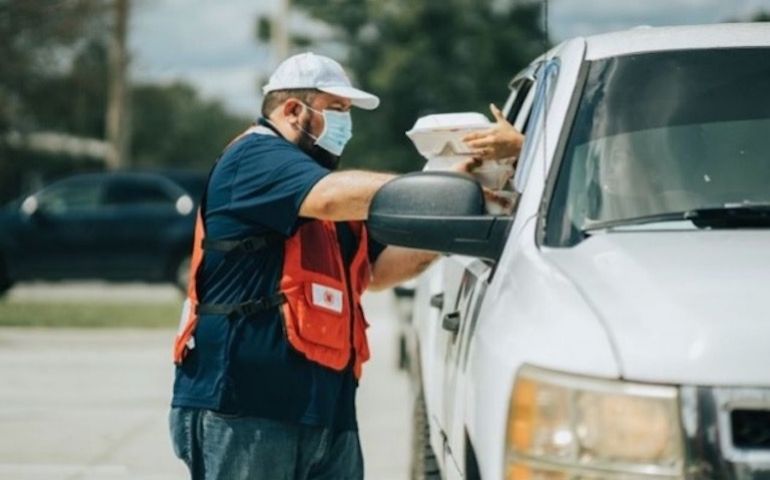 On August 30 Hurricane Ida made landfall along the southern Louisiana coast as a strong Category 4. The storm left power outages across the entire region. As Hurricane Ida moved across the states of New Jersey, New York, and Pennsylvania, the storm's remnants caused widespread flooding and tornadoes. The Salvation Army continues to serve the affected areas as power is restored and recovery projects are developed.

Below is a snapshot of services that The Salvation Army has been providing in the past week.

The Salvation Army Texas Incident Management Team has maintained a robust ongoing feeding operation in communities without power, with increasing focus on the southern Bayou communities in Louisiana. A distribution site providing food boxes, water, clean up kits, and other practical assistance, will open from Thursday-Saturday this week, in Bourg, serving southern areas of Terrebonne County.

“As our mobile feeding units continue to move into areas south of Houma, we’re seeing many communities that have not received much aid,” said Alvin Migues, The Salvation Army Emergency Disaster Services Director for Texas. “The Salvation Army has established a distribution point in Bourg at the request of the Terrebonne Parrish Sherriff’s Department. We look forward to serving the needs of these hard-hit underserved communities.”

Thanks to Midwest Food Bank and PepsiCo, we loaded up our vans this morning to distribute food boxes and snack kits to designated areas that are still in need of assistance after #HurricaneIda.

The Salvation Army has activated its team of trained disaster staff to help with relief efforts in multiple states which have been severely impacted by the remnants of Hurricane Ida. The team will be deployed to Pennsylvania, Delaware, New Jersey, New York and Connecticut.

"We are doing everything in our power to respond efficiently and effectively to the impacts made by Hurricane Ida,” said Robert Myers III, the Emergency Disaster Services Coordinator for The Salvation Army’s USA Eastern Territory. “With the continued generosity of the public, The Salvation Army will remain on the ground serving those affected by the storm for however long our services are needed.”

A Passion and Heart to Serve Despite Personal Loss

When Hurricane Ida made landfall on Sunday, August 29, the powerful storm resulted in damage and destruction throughout southern Louisiana and beyond. For one Salvation Army employee, her passion and heart to meet the needs of others means serving in her very own neighborhood and city.

Angela Brown is from Gray, Louisiana, and is The Salvation Army Service Center Manager in Houma, LA. “Just like many of my neighbors, my home was damaged by the storm,” said Angela. “My ceiling collapsed, and I’ve had water leaking in my home, and there’ll be even more today since it’s raining. Down my street was total devastation. We had several trees fall, and power lines are down. It was bad.”