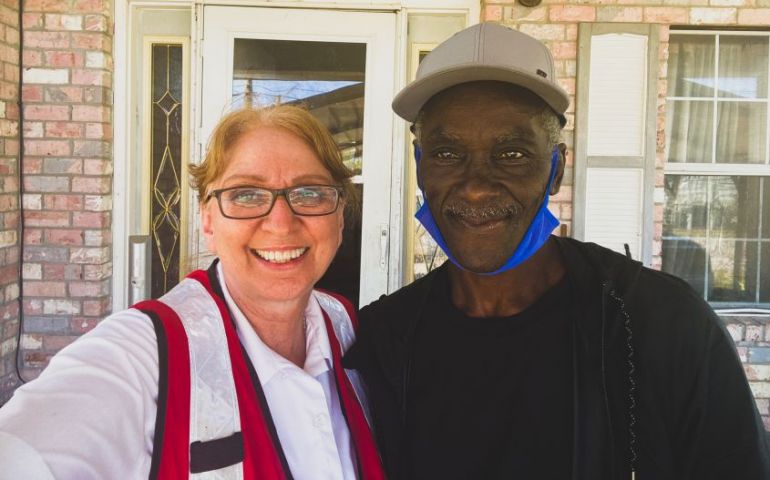 Gonzales, LA (September 26, 2021) – Captain Tamara Robb, Corps Officer (Pastor) in Meridian, Mississippi received a call just after Hurricane Ida made landfall; she had no idea what an impact she would soon have on one survivor's story.

Kevin, who passed out during the storm, immediately called 911 when he woke up and was care flighted to Meridian, Mississippi. He's from Houma, Louisiana, and was in the hospital for several days and then moved into a motel as he couldn't get back home yet. It was a terrible situation, with fights happening right outside his door. He called The Salvation Army, desperate for help, and Captain Robb moved him into their shelter and provided him with food, clothes, a suitcase, and a bus ticket home.

Kevin made it as far as Mobile, Alabama when the bus could no longer head West due to Tropical Storm Nicholas. He reached out to Captain Robb, who had previously served in Mobile, and without hesitation, she called Kerry, Mobile Thrift Store Manager, and arranged a ride for this sweet 62-year-old man and a place to stay at their shelter. After a few days, waiting for Nicholas to pass and working with a caseworker, he could finally head home.

A week or two later, Captain Robb received a call, asking if she could serve on the Emergency Disaster Services team. "I immediately looked to see if I would be near Houma," she said. "Sure enough, I was, and by my second day, I was searching for Kevin to see if he made it home, but I couldn't find him."

Captain Robb continues, "Yesterday, I was serving on the canteen and thought, 'I have to try again.' We found a few neighbors who said they knew him and pointed further down the street to his house. We stopped and asked another neighbor, and to our surprise, she said, 'Yes, that's him right there.' I pulled up, and he saw my van, so I jumped out, and he made his way to me with the biggest smile, 'Brother, I've been looking for you!" Kevin replied, "It is so good to see you. I'm going to cry!"

There is a long road ahead for Kevin, and so many others, to rebuild their homes and communities. The Salvation Army continues to serve those who have no power, providing hot meals, food boxes, cleaning and hygiene kits, and emotional and spiritual care. Since August 31, after Hurricane Ida made landfall, the mobile feeding units from the Gonzales IMT have served 284,582 meals.

To make a financial donation to support ongoing Hurricane Ida relief efforts, go to helpsalvationarmy.org or call 1-800-SAL-ARMY. For the latest disaster response information, go to www.disaster.salvationarmyusa.org and watch for regular updates on our social media pages at www.facebook.com/salvationarmytexas/ and www.twitter.com/salarmytx