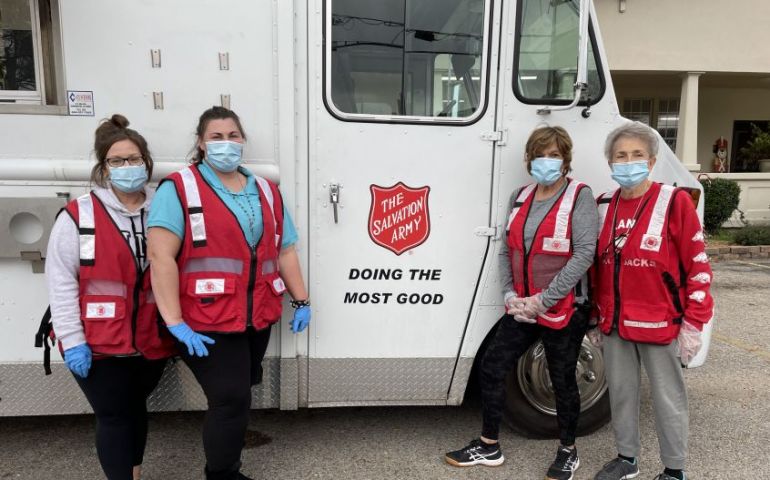 Jonesboro, Arkansas (December 14, 2021) – The Salvation Army calls volunteers "the Army behind the Army".  This statement has been said over and over, yet The Salvation Army would not be able to do what they do without the thousands of volunteers we see each year. Emergency Disaster Service response offers one of the most impactful volunteer opportunities for individuals and professionals, and never has that been truer than right now in the aftermath of the recent tornadoes.

Rosie and Charlotte recently attended training to be disaster workers in Tulsa, Oklahoma.  When the call came through volunteers were needed to help The Salvation Army serve in Northeast Arkansas, they were more than happy to step up and volunteer, even in the middle of the Christmas season. Charlotte states “This is the best Christmas present I could have – to be able to serve and make a difference.” Rosie shared that she willingly missed a family get together so she could serve those who are hurting.

Individual volunteers aren't the only ones who have responded to The Salvation Army's call for help, as community partners, businesses and organizations have also joined with our Emergency Disaster Services teams across the affected areas.

Take, for example, Summit Community Care in Jonesboro, Arkansas.  When The Salvation Army of Jonesboro's commanding officers, Captains Teri and Charles Smith, reached out to Summit for volunteers, Summit responded.  They extended an invitation to their 350 employees across the state of Arkansas to volunteer. Employees answered and were on the ground Tuesday serving meals and smiles to the people in Truman, Arkansas.  Several of the volunteers live in Truman and were happy to give back to their community. Andrea Brown of Summit states, “It’s wonderful to work for a company that promotes community service. It’s good to be able to be here, where I grew up, and serve people I know were affected.”

If you or your business/organization is interested in training opportunities to volunteer with The Salvation Army during its Emergency Disaster Services response, visit disaster.salvationarmyusa.org. The Salvation Army also continues to seek monetary donations to help make a greater impact in the communities we are currently responding to.

Monetary donations are needed and can be made at www.helpsalvationarmy.org or by calling 1-800-SAL-ARMY to support response efforts. For the latest Salvation Army disaster information please go www.twitter.com/salarmyaokeds.