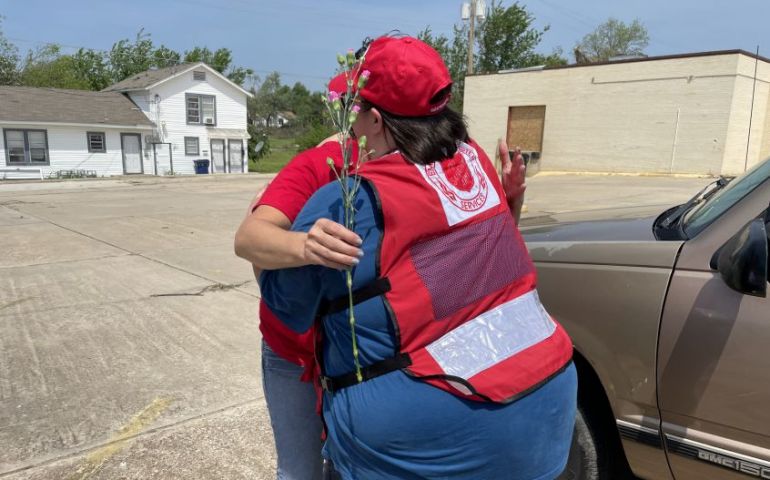 Mother’s Day is a holiday honoring motherhood that is observed in different forms throughout the world.  The Salvation Army wanted to honor the tradition of Mother’s Day while serving disaster survivors with hope and a special blessing.

Shawnee, Oklahoma (May 9, 2022) On Sunday, The Salvation Army had two rapid response units providing meals and drinks to those affected by recent tornadoes.  As mothers and grandmothers, even a great grandmother, came through to receive a meal, they were also blessed with a long-stemmed carnation.

In one instance, a couple was driving through for a hot meal.   When it came up the lady was a mother, one of the disaster team members went and got the flower to hand to her.  When she saw it, she got out of their pickup truck and came around the vehicle in tears.

She stated, “for years it’s been a tradition that her daughter sends her flowers for Mother’s Day.  This year, the daughter called and stated she couldn’t find anyone to deliver flowers due to all the power outages.  I didn’t think I would receive flowers today – you all made my day.”

In another instance, The Salvation Army was able to bless three generations of mothers in one instance.  Although they couldn’t celebrate in the typical way, they were able to be together and were grateful God’s grace kept them safe.

For all, it was greatly appreciated.  Amid power outages, loss of refrigerated foods, damaged homes, and more, the flower represented a piece of normalcy.  "It was a privilege to be a part of such a small but simple gesture that made so many feel blessed," stated Susan Beam, Divisional Emergency Disaster Services Manager, Arkansas-Oklahoma Division.