Floods of People from Flooded Streets: The Salvation Army in Ft. Myers Florida 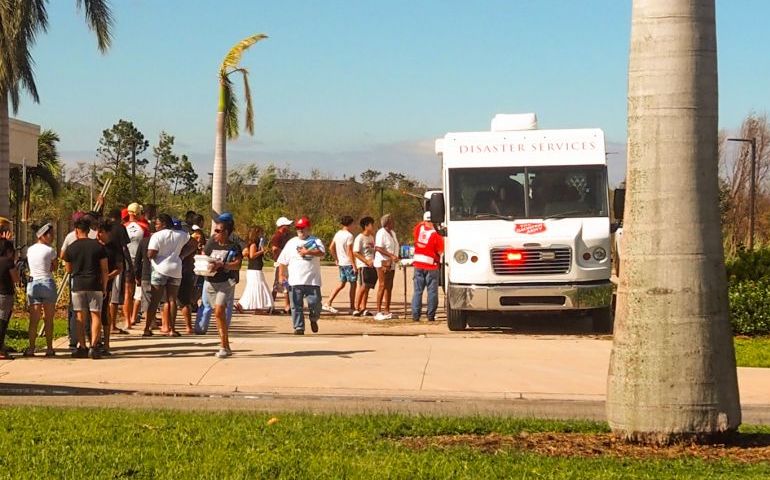 Sometimes a wrong turn can lead in the right direction. When the lead driver of a group of Salvation Army service vehicles missed a turn while searching for fuel, they found themselves in a south Fort Myers neighborhood still mostly underwater. After driving through for a few minutes, Salvation Army canteens were able to stop in the one parking lot still on dry land.

Almost immediately, residents begin to swarm the canteens. Lines stretched down the block as many people were able to receive their first meal post storm. Iris, who waded through waist high water to get off her street said, “I haven’t eaten in two days. I’ve been getting lightheaded. Seeing you guys was such a relief.”

Two young women, Renee and Bella, stopped to load up on meals and water for a local family with a baby sheltering at a bus stop down the street. They refused to take meals for themselves, but Bella added, “We just couldn’t go home and leave… not after seeing that baby.”

Miguel, a local electrician, broke down in tears. “I saved six people yesterday,” he whispered. “But I’ll never forget the sound of those cries for help. I’ll always wish I could have done more. I’m just so glad you guys are here. You got here so fast.”

Salvation Army canteens served food for hours to a line that never dwindled. Even after running out of food, they continued to distribute bottled water to the seemingly never-ending line of grateful residents who swapped stories about water damage and their fears while riding out the storm.

“I was so sad when we saw all the houses still in water and people who have nothing just standing around with nowhere to go,” said Major Josué Prieto. “I was so glad to be able to help them. I prayed with one family who lost everything. It broke my heart, but I was glad to at least offer them food today.”