Shelter from the Storm: Ian through Hada’s eyes in the Naples Corps 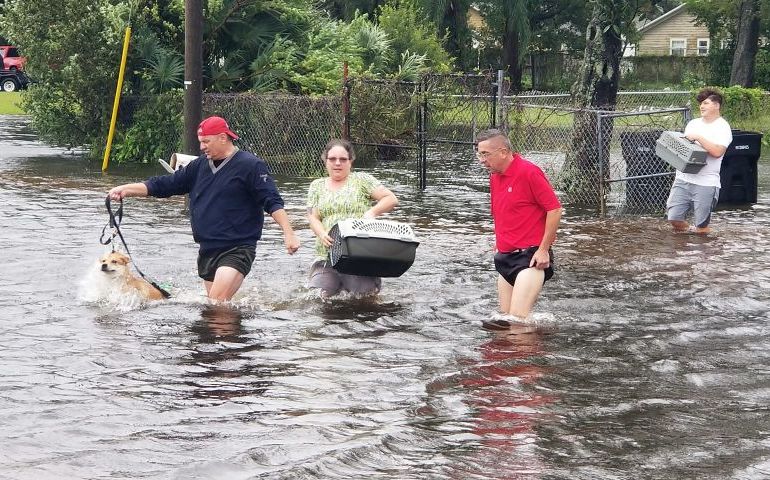 Naples, FL - Due to the waist-deep waters, Captains Bridges of the Naples Corps were not able to captain the ship, so Ada and her husband, Roger Morales, who attend the church and volunteer at the corps, stood guard and kept order.  The following narrative was translated from Spanish.

As Hurricane Irma caused a bit of damage to their neighborhood in the past, Captains Bridges granted them permission to stay at the Corps. As soon as they arrived at the Corps, the storm intensified, and people began arriving one by one seeking shelter from the storm. As water flooded the area surrounding the Corps on Estey Avenue, as well as the main street of Airport Pulling Road, they began hearing knocks at the entrance door. They arrived in dinghy’s, in kayaks, on foot, soaking wet, and carrying nothing on their backs save for their pets. On that night, the Corps resembled Noah's Ark, with dogs and rabbits accompanying them.

One elderly gentleman, who dried up after arriving cold and soaked, was given a cot by Corps staff to rest on. “One of the most beautiful things that came out of this was that everyone seeking shelter had an attitude of gratitude; there was no complaining, yelling or frustration,” said Hada. The corps' entrance was watched by her husband, and the bathrooms were watched by her, allowing one person at a time to use them.

The families adapted themselves as best they could, Ada and Roger slept at the Corps, using the available cots, and sharing rooms with other families. Once the flooding outside had receded the next day after Hurricane Ian passed, everyone started returning home to see what could be salvaged.

Thankfully, God always provides, and we brought drinks, snacks, and anything else we could give the individuals. “It was a beautiful night despite all the pain and aggravation” said Hada, “despite losing many things, despite a terrible situation, there were grateful hearts and harmony, which was beautiful to see.” We will help fill one thousand meals today, and we will fill one thousand meals tomorrow.