Blessings after Tragedy in Bonita Springs 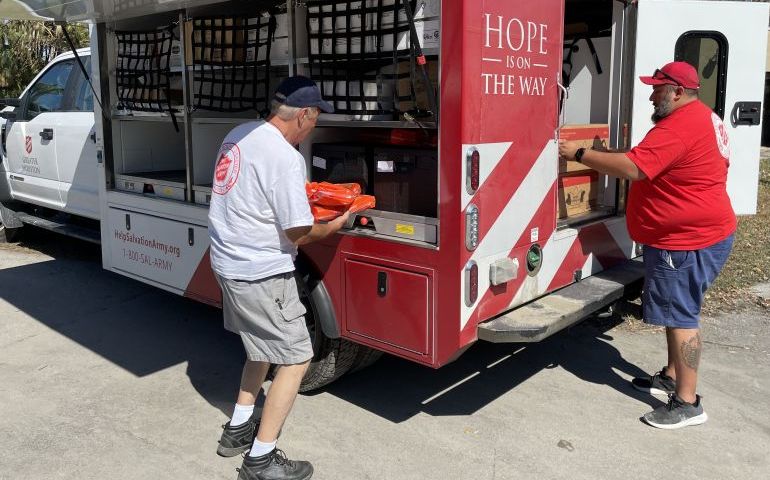 (Bonita Springs, FL) – In the wake of historic Hurricane Ian making landfall in this region, neighbors are helping neighbors in the beachside city of Bonita Springs, just south of Fort Myers. They have partnered together with The Salvation Army to setup an impromptu donation and distribution site at American Legion Post 303, which itself was completely swamped by a reported 16-foot storm surge. All the furnishing from within the lodge sat outside in the hot sun to dry out, while The Salvation Army disaster workers unloaded meals at the distribution site.

“The devastation is widespread here, and we’re honored to be able to serve them in their time of need. We just want to be the hands and feet of Christ here and let these people know they are loved,” said Lieutenant James Guzman of The Salvation Army. Guzman himself traveled more than 1,100 miles from his home in Conroe, Texas, to assist with the Army’s effort.

Keren Berman, one of the organizers of the distribution site, was visibly shaken as she described the effects the storm wrought on the area. “Every building in this area was affected by storm surge, and most had a foot of mud in them afterwards. Every car in the area was destroyed, so people have no way to get around. That’s why we setup here, to give them somewhere they can get to easily,” said Berman, fighting back tears as she also described the loss in the area. “One couple in their 90s, the neighbors were able to rescue them and some of us have been wiping down their photos and things. It's the only memories they have of a house they lived in for 44 years.”

The Salvation Army’s Emergency Disaster Services team from Texas continues to serve survivors in the Fort Myers metro area with life-sustaining meals, drinks, and snacks, while also providing an increasing number of emotional and spiritual contacts with residents.

Since October 1, The Salvation Army team in the Fort Myers area has served the following:

The Salvation Army plans to continue its response as long as needed, and is coordinating its efforts with federal, state, and local officials, as well as other social service agencies.